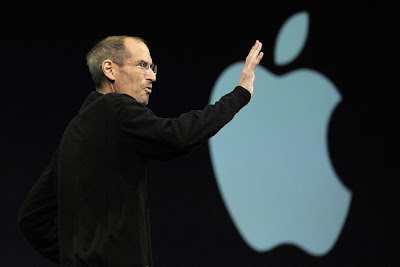 Although Steve Jobs's health problems have been the source of discussion for quite some time, it was a bit shocking to read the announcement that he is resigning as CEO of Apple, though he said he'd like to remain as the Chairman of the Board:


Steve Jobs, the visionary who remade Apple into the world’s dominant maker of tech gadgets, has resigned as the company’s CEO.

In a letter to the Apple Board of Directors and “the Apple Community” Wednesday, Jobs wrote that Chief Operating Officer Tim Cook will take over his CEO duties.

“I have always said if there ever came a day when I could no longer meet my duties and expectations as Apple’s CEO, I would be the first to let you know. Unfortunately, that day has come. I hereby resign as CEO of Apple. I would like to serve, if the Board sees fit, as Chairman of the Board, director and Apple employee,” Jobs wrote.

“As far as my successor goes, I strongly recommend that we execute our succession plan and name Tim Cook as CEO of Apple. I believe Apple’s brightest and most innovative days are ahead of it. And I look forward to watching and contributing to its success in a new role. I have made some of the best friends of my life at Apple, and I thank you all for the many years of being able to work alongside you.”

With Korea-based Samsung being a major competitor of Apple, this news is no doubt of interest to many. Here is the Wall Street Journal's Seoul correspondent Evan Ramstad's take on it, which comes as the good people of Seoul vote on a free lunch plan that pits South Korean deeply engrained post-war egalitarian ideals against recent calls for fiscal prudence:


The fate of Seoul Mayor Oh Se-hoon is dominating the South Korean media Thursday but the resignation of Steve Jobs from his CEO role at Apple Inc. isn’t far behind.

Mr. Oh presided over a failed referendum Wednesday to reduce the scope of Seoul’s school free-lunch program and strongly intimated that he’d resign as a result. So people are waiting for that shoe to drop.

But Mr. Jobs’ departure from his main operating role at Apple is also getting huge attention. In part, that’s because of a media-driven narrative that Apple and Google are threatening to South Korea’s “national champion” companies Samsung and LG. On the other hand, Mr. Jobs is widely admired in South Korea as a visionary and entrepreneur.

His resignation speech was quickly translated into Korean and posted on the country’s main portal site, Naver. And thousands of South Koreans took to Twitter to write short tributes to Mr. Jobs.

“He was the greatest CEO, a visionary to create the dream, a strong person who practices what he pledges,” Jeong Ji-hoon, a medical doctor and prominent tech blogger in Seoul, wrote via Twitter. “We are paying our respect to the resignation of the greatest giant of our time.”

I guess we're still waiting for a couple sets of shoes to drop. I wish some other long-serving chief executive would resign instead over health reasons.