Marking the 66th anniversary of the atomic bombing of Hiroshima

August 6 was actually yesterday, Japan time, so I missed it. As ROK Drop notes, this year's ceremonies remembering the victims takes on a different tone — even urgency — in light of the still on-going nuclear disaster at Fukushima.

I've written plenty on Hiroshima, which I've visited twice, but my thoughts are best summed up in this post, which I encourage you to go read on this day. (It includes a discussion of Korean victims of the blasts at Hiroshima and Nagasaki, called hibakusha in Japanese or p'ipokcha in Korean.)

On last year's anniversary, The Western Confucian put up a post on Hiroshima that turned into a lengthy discussion of the morality of dropping the bomb on a civilian population — twice — in order to win the war. 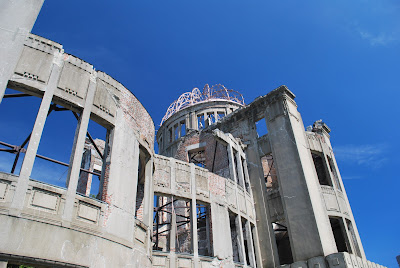 Email ThisBlogThis!Share to TwitterShare to FacebookShare to Pinterest
Labels: Hiroshima