ORIGINAL POST:
One of those popular urban legends about South Korea is that kids in English-obsessed South Korea are getting their tongues snipped (a procedure called lingual frenectomy) in order to pronounce English more accurately. I call it an urban legend because, while there certainly are people who have gotten the surgery done, it has reached the point where there are more stories about this supposedly popular Korean procedure in English-language media than there are people who have actually done it. I think. 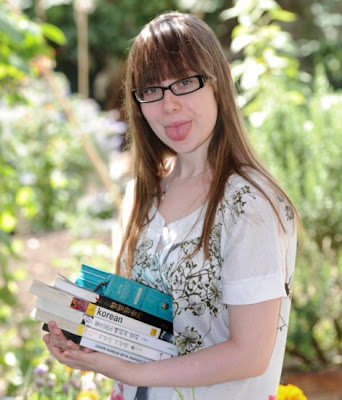 Now the British media has brought us a twist on this story. It seems one university student in England is obsessed with Korean culture and learning Korean (see all those Korea books she's carrying), and (wait for it...) she has had a similar tongue-lengthening surgery in order to speak Korean better.

From the UK's Daily Mail:


Student Rhiannon Brooksbank-Jones dreams of living and working in South Korea once she finishes university, even though she has never visited the country.

But while taking language lessons, the 19-year-old found that she couldn't pronounce certain crucial sounds in the Korean alphabet.

Her dentist suggested it may be because she was born with a slightly shorter than average tongue, caused by having an unusually thick lingual frenulum - the flap of skin that joins the underside of the tongue to the floor of the mouth.

After discussing the matter with her parents and language tutor, Rhiannon decided to undergo an operation to correct the condition, despite the fact it has never caused her any problems in speaking English.

She underwent a lingual frenectomy, which involves making an incision in the flap of skin. As a result, Rhiannon's tongue is now about 1cm longer, and she can say words that were impossible before.

Rhiannon, of Beeston, Nottingham, said: 'I'd been learning Korean for about two years, and my speaking level is now high, but I was really struggling with particular sounds.

'It became apparent after a little while that I was having trouble with the Korean letter 'L', which is very frequent and comes from a slightly higher place in the mouth than the English 'L', and that my tongue was too short.

'My pronunciation was very 'foreign', but now I can speak with a native Korean accent. The surgical procedure was my only option. It's not like you can stretch your tongue otherwise. I just decided enough was enough.

Anyway, while in Korea I imagine a lot of anglophones would scratch their head and say, "What the...?!" for the same reasons we might do the same about six-year-olds with English-obsessed Korean mothers having the surgery (if you have a tiger mom, expect to get mauled a bit), back in the United Kingdom people are hemming and hawing about this surgical procedure having been covered by the national health insurance scheme. Apparently this Nottingham native is some sort of modern-day medical Robin Hood: stealing from the rich National Health Service and giving it to her poor, unable-to-pronounce ㄹ self.

Okay. But me? I smell a carefully crafted ploy by a young, smart, and reasonably attractive young lady to launch a career in Korea's public sphere: she's cute (never hurts with any job), speaks Korean pretty well (a plus for doing anything other than English teaching), has considerable interest in Korean culture (an ego massager for a large portion of the Korean masses), and has the kind of figure many Korean men like in Caucasian women (that's a euphemistic way of saying she has a good-sized chest while falling within the range of thin to nothing larger that chubby-cute). And I like her glasses.

So in conclusion: Get in touch with me, Rhiannon Brooksbank-Jones, and I'll make you a star.

Seriously. And I've already christened you 메롱걸* (the only alternative is 혀녀). That's what we call 서비스.

* To understand what is 메롱 (merong), see the picture below:


UPDATE:
This story has also become a post at The Marmot's Hole. Human rights lawyer Ben Wagner, who is highly skilled at finding bigotry where no one else does, has revealed that Merong Girl is promoting racist viewpoints:


All the best in to Rhiannon in her Korean language studies, but I wish she hadn’t chosen to perpetuate to the myth that race is somehow tied one’s ability to speak a language with native fluency. Ironically it’s an allegedly short “Korean tongue” which supposedly makes it difficult to produce the English L/R sounds, the Brit’s “short” tongue should have made her a natural if any of these nonsensical theories had any scientific basis.

Thank goodness for Mr Wagner, or else I wouldn't have realized Ms Brooksbank-Jones was perpetuating race-based myths. Here I thought that the reason for the surgery was that her tongue (i.e., not the tongue of most White people in England) was "shorter than average" and that she (i.e., not most White people in England) had "an unusually thick lingual frenulum." Now I realize she's some sort of White Inferiorist. I may have to rethink launching her career.