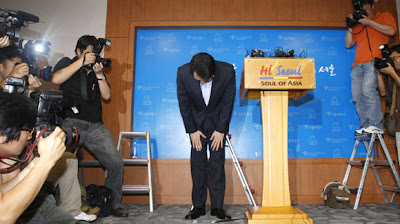 Well, to our left we have Seoul Mayor Oh Sehoon resigning after failing to muster together enough votes or voters for his egalitarianism-versus-fiscal prudence school lunch referendum. Effective immediately. This was done as promised after Mayor Oh got only one in four Seoulites to vote when he'd promised to quit if it were less than one in three.

And the to our right we have Japanese PM Naoto Kan resigning, echoing the words of Andy Warhol that in the future everyone in Japan will be prime minister for fifteen minutes. Kan's resignation was also to fulfill a promise, which makes me think it sorta sucks that the only politicians we can trust at their word are the ones leaving office. 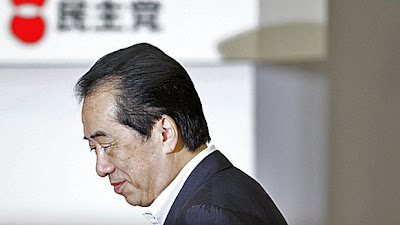 What does this all mean? My guess is that Oh and Kan have been planning to run away together for sometime. Really, that's the only plausible explanation.

Anyway, I'm a little embarrassed to admit that I didn't follow Oh's policies in our fair city while he's been mayor quite as much as I should have, even though they probably have a profound effect on the vector* of my humble-but-takai apartment's market value. Kan, on the other hand, was someone well known for trying to make nice with South Korea and other victims of Imperial Japan's aggression, so I'm a little sad to see him go for that reason.

Also, his departure means I won't have many more opportunities to run this:


* That's direction and magnitude, in case you've forgotten middle school math, as in will it go up or down and by how much.