I'm still doing light posting, but I thought this was a bit newsworthy, even if it is expected. The devastating rains that have pounded Korea and caused massive flooding and mudslides in Seoul have also wreaked havoc on North Korea, apparently, although we don't know the extent.

As usual, Beijing the Benefactor will bail out Pyongyang:


North Korea says China and its Red Cross have decided to give Pyongyang relief aid to help recover from recent flooding.

KCNA didn’t reveal the amount of aid. North Korean media said last week that the country was seriously suffering from flooding that had inundated rice fields and destroyed roads, houses and public buildings.

Thank you, Beijing. Now the West (i.e., the US, the EU, Japan, and South Korea) can avoid a discussion about whether disaster aid to Pyongyang would be propping up the regime.

Meanwhile, the damage we actually know about in South Korea is mind boggling. By now, my readers have probably also seen this video:

This video freaks me out in part because this major road (the Nambu Beltway) is one I traveled every day to and from work. Frankly, I never imagined that small mountain (or big hill?) could ever have caught enough water to cause this kind of damage, but when half a meter falls in a few days, I guess it's possible. 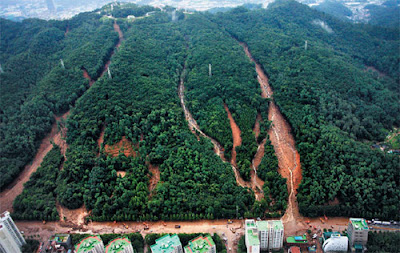 Above is a view of the mountain after the damage, courtesy of the Chosun Ilbo (whose link includes more video). Below is one of the apartment blocks that were hit. 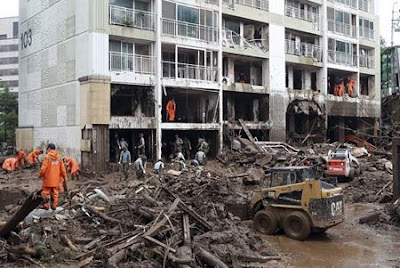 As one ROK Drop commenter noted, a lot of people assume you're safe on the second floor or higher, but the second floor of this building looks like it was hit as bad as the first, and third floor was probably inundated as well. 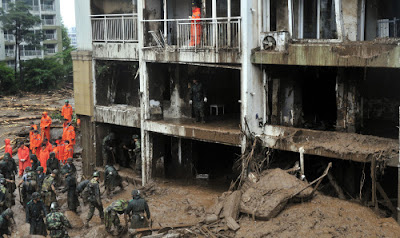 My apartment is on the seventh floor of our building, which itself is midway up the slope to Namsan. That would mean we're highly unlikely to be flooded, but susceptible (although probably not by much) to a mudslide from Namsan.

This was indeed something I thought about when I chose homes for lease or purchase. Having gone through a serious up-to-your-chest flood in Kaebong-dong back in the 1990s (which looked as bad as the intersection at Taech'i Subway Station today (see below), when I was an adult on my own later on I chose homes on higher ground. 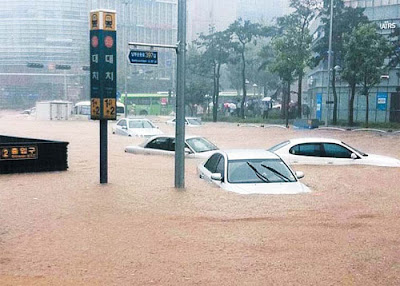 The Mt Umyŏnsan video toward the top of this post reminds me of the mudslide that buried the California coastal community of La Conchita in January 2005 (more photos here). Both were unexpected, hitting relatively affluent communities that were not built onto the hillsides themselves.

In Southern California, we have a cycle of late summer and early fall brush fires wiping out foliage that holds soil in place, leading to the earth giving way when the rainy season comes in the winter. The rain in turn brings more grass in the spring, which dries up and turns into tinder for the next round of brush fires and then mudslides. If you live in the hillsides, this is a real hazard (along with coyote attacks and occasional mountain lion mailings and killings or even bear visits). Some comedians would joke that wild animal attacks, mudslides, and brush fires were God's way of telling you, "Don't build here," but with most homes on the (relatively) safe coastal plain, Orange County and much of Southern California are low on the death map.

But I'm digressing. I'm concerned that Korea is still in for some more very wet weather. It may or may not be the worst since they started keeping official records in 1907 (that claim seems to be bandied about every time there's severe weather, which means it's either being used as inaccurate hyperbole or the disasters are indeed getting progressively worse), but it's pretty bad. Godspeed and God bless. My prayers go out to everyone affected by this tragedy.