Gloria Steinem wants to save Cheju-do


Gloria Steinem actually has visited subtropical Cheju-do, the southernmost province of South Korea and the only island province (insert "Korea's Hawaii" remarks here), and she is bent of preserving it by making the world aware of local residents' efforts to block construction of a ROK Navy base there:


Residents of Gangjeong [Kangjŏng], the village that is to be home to this base, have been living in tents along the endangered coastline, trying to stave off the dredging and bulldozing. In a vote several years ago at a village meeting, residents overwhelming opposed the base.

They’ve tried to block construction with lawsuits and pleas for a proper environmental impact study. They’ve been fined, beaten, arrested and imprisoned. They’ve gone on hunger strikes, chained themselves to anything available, invited tourists in to see what’s at stake, established Web sites and won support from global peace organizations. Members of the “no base” campaign, including children, camp out along the shore behind high walls erected around the site to conceal the protests. Police officers patrol outside. This has been going on for more than four years.

Okay, while she may have a legitimate argument about the environment and human rights involved, it was her laughable geopolitical reasoning that compelled me to write. She states simply — no, over-simplistically — that "China and South Korea have positive relations at the moment." Yup, as if peace for the moment means we can completely let down our guard. 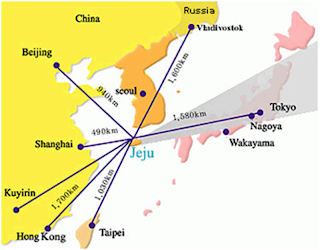 China and South Korea have positive relations for now, but that doesn't mean that China is not slowly putting out its feelers for weak points where it can grab land, territorial waters, etc., etc., including on the Korean Peninsula. South Korea needs to be able to protect itself, with or without its strong US ally. It also needs, sometimes, to project itself, perhaps by sending out ROK Navy boats to protect South Korean ships and the ships of its allies (and sometimes its enemies, as its done against pirates off the coast of Africa).

In short, South Korea needs its naval base. Now, whether or not it should go right there is another question, and certainly one would hope for as little environmental impact as possible. But "things are hunky-dory with China" right now should not be part of the argument.

The rest of the article, by the way, is worth a read if you're not familiar with Cheju-do's horrible history in the years between liberation from Japan and the start of the Korean War. There's a reason why leftist former President Roh Moohyun was compelled to go to Cheju-do and apologize for past acts of the ROK government and declare Korea's Oahu (that's my description) an Island of Peace.