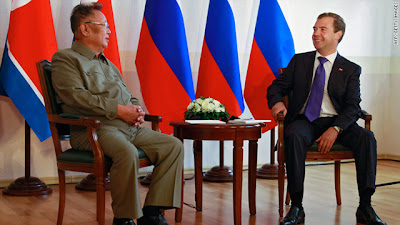 One bit of news coming out of Russia during the Dear Leader's visit to North Korea's once and future benefactor is that Kim Jong-il has agreed with the idea of laying a gas pipeline to South Korea through the DPRK.

'As far as I understand, North Korea is interested in the implementation of such a trilateral project with the participation of Russia and South Korea,' Mr Medvedev said after a rare summit with North Korea's Kim Jong Il, praising the talks as 'open, (and) substantive.'

Mr Medvedev said the proposed pipeline would stretch more than 1,700km and start up with volumes of up to 10 billion cubic metres per year.

The Russian leader said he has issued instructions for his government to work out the framework of a subsequent agreement that would be signed between Moscow and Pyongyang.

Pyongyang notes that the high-tech pipeline would come equipped with a money spigot that will channel cash directly into Pyongyang vaults whenever the mainline is shut off.

UPDATE 1:
Apparently the interpreters at Agence French-Presse completely botched the original Russian. While the original translation stated Kim Jong-il agreed with Russian suggestions to return to the Six-Party discussions and to run a Russian pipeline through North Korea, what was actually said was that Putin told Kim Jong-il he'd ass-fuck him Oz-style if he didn't agree to return to denuclearization talks.

UPDATE 2:
Ignore the first update. In future, I need to approach Dokdo Is Ours! with a bit more skepticism.