Okay, I'm mixing up my reality show titles, but there's a method to my mad pun.

In my super-mega-uber-popular post highlighting the attributes of Christina Cha of Survivor: One World, I offered up the possibility that the unwarranted animosity and vitriol being thrust on Christina was rooted in racism somehow:


... there are a bunch of people there who have a horrible hate-on for her and I cannot figure out why. We the audience have seen absolutely no reason whatsoever for them to despise her with the passion they do, but they have been vicious.

What gives? She has has been friendly, she pulls her own weight around the camp, she hasn't backstabbed anyone, and she seems likable. So what gives with all that animosity?

Since it seemed to stem from that one Republican fellow who thinks he's a woman, I started to develop a theory. Colton is a gay person in Alabama and in the GOP who spews bigotry and intolerance toward others (e.g., "ghetto trash"). I mean, really? Irony much?

And since he seems to be the fountainhead of the river of vitriol reserved for Christina, I have to wonder if that, too, does not stem from, to put it bluntly, animosity toward Asians, or Koreans in particular. (Maybe he didn't get a job at the Kia factory.)

Well, we're starting to see how right that speculation was. When fellow Asian-American Jonas Otsuji was ousted, it was revealed in a tweet by none other than Jeff Probst himself that the castaway engineering the removal of Jonas had actually said this (it was bleeped):


#survivor big words from tarzan and there's the quote of the day - 'cant look at that asian face anymore."

Seriously, what effin' century are you living in, man? And lest you think otherwise, this guy Tarzan is not some uneducated type: he's a plastic surgeon for criminy sake!


Jonas was apparently unaware of the remarks that Tarzan had made:

Prior to that, he had defended Colton against the charge I'd made:


No, he's obviously not a racist, because if you're a racist, you single out a certain group of people. Colton hated every single person out there and he wasn't afraid to say it, so you can't say that he hates blacks or Asians. He hates everybody. (Laughs) At least that's the show that he puts on. I don't think that he really does.

But would he have seen things differently if he'd known about his other tribemate's little slur? Or, if he saw something like this: 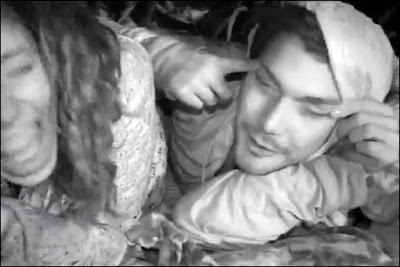 Seems Colton is doing a Miley Cyrus imitation, with psycho special ed teacher from hell Alicia cracking up over it. Geez, do these people not realize they're on national television?

Seriously, doing "chink eye" in 2012? How emotionally stunted in fourth grade can you be?

The clip can be found with commentary at Angry Asian Man. [UPDATE on May 17, 2012, after Christina Cha came in fourth this season: I've decided to include the actual video clip of the above scene just below here; it includes Alicia following suit and also doing the "chink eye" bit. Apparently, Christina Cha is afraid of ghostly spirits, something that is engrained in Korean culture.]

Really, the thing that bothers me about this is that I fear it reflects a current that flows just below the surface, where average, everyday Americans have a hate-on for those around them stemming solely from that other person's race or ethnicity, not just targeted toward Asians but whatever group (including non-Whites against Whites).

Sure, that would be nothing new, and outwardly at least our society frowns upon it, but is this any way to live?