Forget it, chaebol. It's shantytown. 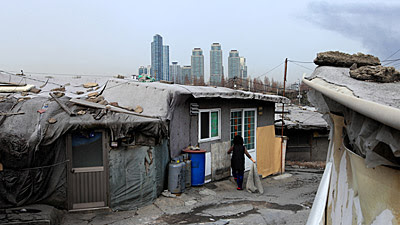 John Glionna of the Los Angeles Times has an interesting piece on one of the shantytowns (weren't some of them called "flower villages" [꽃마을] at one time?) on the outskirts of Seoul, which developers and construction companies are eyeing for renewal. And by renewal I mean beanstalk apartments, vertical cities that allow for a hundred people per acre or more.

The thing is, despite being promised low-income housing, a lot of the shantytown residents want to preserve their neighborhood (and having lived in an old house in a colonial neighborhood of Seoul where the neighbors all knew each other going back decades, I can appreciate the sentiment).

The fact is that the bulldozer isn't a very discriminant when it comes to razing neighborhoods: everything must go! And that means a lot of character in the form of the well-maintained but old-but-not-old-enough-to-be-an-historic-landmark buildings suffer the same fate as the ramshackle houses that look like everything except the walls is held together with duct tape. My old home, built in 1935, was as sturdy as ever when, in the middle of the past decade, it was knocked down in order to build a cookie-cutter multi-family flat.

Ironically, that structure will suffer the same fate in two or three years when the entire city block is knocked down so shiny mid-rises and high-rises can take their place. As an apartment owner who would like his thirty-year-old apartment replaced with one that's twice as big, twice as high, and twice as valuable, I understand the other side of the equation as well. But wiping out all those colonial-era homes, some with the original residents, is just such a tragedy.

Of course, this is sort of an apples-and-oranges comparison, because my neighborhood (the old house and my current apartment are a couple hundred yards from each other) is not a shantytown. No one has a plastic sheet as a wall. Those neighborhoods are not just an eyesore, but a veritable health and safety hazard.

But they have community, and that's what they're clinging to. Sure, the remaining residents will have their new homes in close proximity to one another, but the interaction will not be the same, nor will the atmosphere of the current shantytown. Surely something can be done so that both sides win.

Anyway, here's a chunk of the article:


The 72-year-old grandmother [Cho Suja] lives in a two-room shack with plastic flooring, sandwiched between other shacks built from planks of wood, corrugated tin, castoff door frames and bamboo screens, like a jumble of shipwrecks.

But Cho doesn't envy her wealthy neighbors, not one bit.

She's proud to be one of the original inhabitants of Guyrong village, a ramshackle shantytown sprawling alongside the exclusive Gangnam area, the highest-priced real estate in South Korea.

And she's fighting efforts by Seoul officials to bulldoze her community of 1,200 shacks and move her and 2,000 others into low-income apartments that will be part of a new mixed-use community to be built on the same site.

"I love it here, to get on my hands and knees and plant my flowers in the spring," she said. "I open my door to the sweet smell of acacia flowers. This area may not look like much, but to me it's heaven. And I'm not leaving it for any matchbox apartment."

For decades, the village has been a catchall for South Korea's down and out, a collection of outcasts that turned no one away. There are women whose husbands died suddenly, leaving them to raise their children alone; couples who lost jobs and businesses and had nowhere else to turn; men without work, homes or families because of alcohol or bad luck.

Here, homes and people crowd on top of one another. In the summer, when the windows are open, coughs and conversations next door are easily heard. There is little rhyme or reason to the place, just shack after shack taking on the haphazard form of words in a Scrabble game.

Some people are surrounded by concrete; others, like Cho, are lucky enough to have a patch of dirt for a garden. Pity the poor souls who live next to the outhouses.

But residents of Guyrong — whose name translates as "three dragons rising to the sky" — say they have worked hard to build a community. A volunteer force patrols the narrow alleyways, and every year there's a spring festival in which children offer the elderly red roses as a sign of respect. Neighbors collaborated to install a fire extinguisher at nearly every shack. They built churches, stores, a barber shop and a beauty salon.

I think Mr Glionna has the translation of the town wrong. Kuryong means "nine dragons" (九龍). I don't know if they're rising to the sky (like the apartment towers — how poetic), but there are nine, not three.

More interesting, particularly for those of you who have spent time in Hong Kong, the former British colony also had a long-running conflict with local residents who lived in terribly run-down section of the city, except these were mid-rise towers. It was called Kowloon Walled City, and Kowloon means... wait for it... "nine dragons," with the same hantcha (Chinese characters) as Seoul's Kuryong/Guryong. 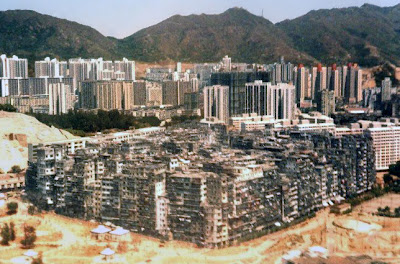