I first mentioned Dr Kim of Dartmouth University in this post, when the Obama administration first nominated the M.D. doctor to head the world's premier development agency. Unlike past nominations, Dr Kim's was unusual in that (a) he is not an economist by training and (b) he had some notable opposition.

The Economist, which supported the finance minister from Nigeria for the position (insert joke about 419 scam here), had an interesting post-election rundown on Dr Kim's rise to this very important position:


Jim Yong Kim, currently head of Dartmouth College in New Hampshire, will take over from Robert Zoellick in July. But the contest has raised awkward questions both about the bank and Mr Kim himself which will not be laid to rest so smoothly.

The contest was unprecedented from the start, not least in that it was a contest. For the first time, America’s favourite was challenged by two serious contenders, both from emerging markets. They were Ngozi Okonjo-Iweala, the finance minister of Nigeria, and José Antonia Ocampo of Colombia, who pulled out late in the day. A group of American professors and development experts, led by William Easterly of New York University and Lant Pritchett of Harvard’s Kennedy School, criticised Mr Kim for having too narrow a field of expertise to run the world’s premier development institution. (The Economist also supported Mrs Okonjo-Iweala.) Members of the administration and Jeffrey Sachs, the director of the Earth Institute at Columbia University who was himself nominated for the World Bank job, supported Mr Kim vigorously.

Frankly, I'm not too terribly concerned about Dr Kim's "narrow field of expertise." The World Bank is full of economists and analysts who can do the number crunching on the finance side if Dr Kim is not up to the task. What I like about Dr Kim is what he brings to the table. The grand projects of the IMF, the World Bank, and various other developmental agencies and NGOs often fail to consider the human side of the equation, either as an asset and an engine or as a casualty. The premise-on-faith seems to be that a rising tide will lift all boats, when they don't consider that so many millions are tethered to the lowest point of the seabed.

Dr Kim has a grand vision, as we can see in the health projects he's worked on, but I expect that his background might make him see that the big picture is made up of a whole heckuva lot of little pictures. Maybe it's the public health person in me that imagines Dr Kim will see the pixel-view of the developing world in the same way that (I hope) I do.


Michael Woolcock, a World Bank staffer, suggests that two rather different models of development have been pitted against one another in the contest for president. On the one hand is what he calls Big Development, whose aim is the transformation of entire countries through investments in national education, justice and public health. Governments are essential to Big Development because they are responsible for the overall policy. And the World Bank is pre-eminently a Big Development institution. On the other hand is Small Development. “Inspired less by transformational visions of entire countries,” Mr Woolcock argues, “and more by the immediate plight of particular demographic groups (AIDS orphans, child soldiers, 'the poor') living in particular geographic places (disaster zones, refugee camps, urban slums), Small Development advocates focus not on building systems in the medium run but on compensating for the failure of systems in the short run. ‘Development’ thus becomes an exercise in advocacy, in accurate targeting, in identifying particular ‘tools’ that ‘work’”.

In this scheme of things Mrs Okonjo-Iweala, the former finance minister, represented Big Development; Dr Kim, a public-health advocate, Small. Dr Kim was almost certainly picked because of his passport. But if his background is any guide, his tenure as chief is likely to shift the bank more towards Small Development. Whether that is a good thing on balance remains to be seen.

Despite my support for having a health-oriented person in the driver's seat at the World Bank, I think Nigeria’s Ngozi Okonjo-Iweala might also have done a fine job if she were able to bring the same anti-corruption and pro-transparency experience from Nigeria and make it work on the international stage. 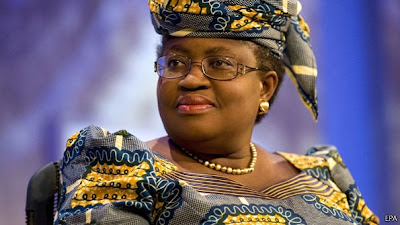