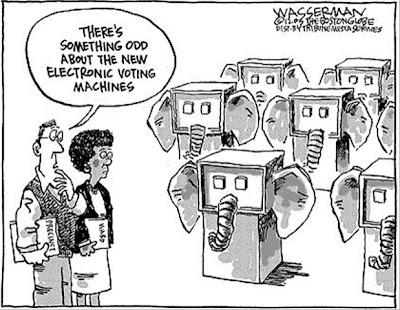 I'm going to sound like a paranoid hack, but ever since 2004, when electronic voting systems were discovered to be giving George W. Bush thousands more votes for president than there were actual residents of the jurisdiction in some parts of too-close-to-call Ohio, I've been very leery of "voting technology" that does not leave a paper trail or which can be hacked.

Actually, I had been worried about this even longer, but my fears became reality in the 2004 election. Though Ohio in 2004 was less infamous than Florida in 2000 (largely because Democratic candidate John Kerry conceded on election night instead of contesting the preliminary results like Al Gore had done in 2000), the election-deciding vote in the Buckeye State was a mess (see also here).

One notable incident among many was the aforementioned granting of 4,258 votes to Bush in a precinct with only 800 registered voters casting 638 ballots (Kerry received 260 votes). This "glitchy memory card" incident occurred in the town of Gahanna, a name that ought to be as familiar as "butterfly ballot."

Amazingly, though, this issue has all but disappeared from the public space, but perhaps we should be paying attention again. It seems that more and more jurisdictions have been using SOE software to run their elections. Last month, SOE was acquired by a company SCYTL, and that puts a substantial amount of control over our electoral process in the hands of a foreign company (SCYTL is based in Spain). This is not meant as a secret, as it's portrayed prominently on their website:


Scytl has acquired 100% of SOE Software. Scytl is a technology company specializing in the development of secure electronic voting and election modernization solutions. Based in Barcelona and with offices in Baltimore, Toronto, New Delhi, Athens, Kiev and Singapore, Scytl’s solutions have been used in public elections by governments from countries such as the United States, United Kingdom, France, Canada, Norway, Switzerland, United Arab Emirates, South Africa, India and Australia. Scytl is a portfolio company of leading international VC funds Nauta Capital, Balderton Capital and Spinnaker. More information is available at www.scytl.com.

While it's a positive that they are transparent about who and where they are, that doesn't make the prospect that American elections can be controlled or even manipulated by or in foreign offices any less ominous.

And just why is this kind of thing happening? There are certain aspects of our lives where quality is of the utmost concern, not frugality. Elections are supposed to be accurate, not economical. If this is a move to make the elections process cheaper, forget it. If it's an effort make the elections process more efficient, then we have to ask what kind of efficiency we're looking for. If it's about counting votes fast, forget it.

If it's about counting votes quickly but in a way in which they can and will be independently verified through a hand count, then that's something we can work with.

What it comes down to, though, is that I don't even trust Republicans (e.g., Ken Blackwell) to manage our elections, much less some cabal in Spain over whom the United State has no jurisdiction.

And no, I am not a kook and I don't wear a tinfoil hat, though I occasionally rock a cotton fedora. Interestingly, I first heard about this at a conservative website (the kind where I occasionally leave comments informing them where their facts are completely out of whack and/or mocking them). It's nice to see they are taking up the issue (though it's largely because they think this is how Obama will steal the 2012 election — evidenced by him confidently telling the Russian leader what he'll do after he's re-elected), but I wonder why this never bothered them in 2004 when their candidate rode these machines into the White House.