UPDATE:
The passengers were forced to stay overnight on Vancouver Island while the plane was swept for anything threatening. No bombs were found on board except Happy Feet Two and The Tower Heist on the video-on-demand system. The plane took off and is headed for South Korea as we speak. 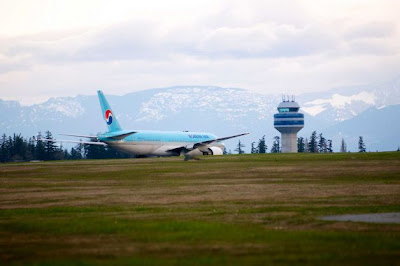 ORIGINAL POST:
I hate flying. I understand the technical aspects of how an object that weighs hundreds of tons can fly through the air even though I, at a mere 68 kilograms, cannot.

Last January, when the Los Angeles to Honolulu flight I was on took on obvious detour up the coast of California instead of heading straight out to sea, I was more than a little nervous that someone had quietly taken over the cockpit and was aiming us at, I don't know, the Golden Gate Bridge or possibly some redwoods. (Going toward the Bay Area from LAX is about 90° off from the direction we should have been heading.)

But I can only imagine the horror of being on this Korean Airlines flight from Vancouver, British Columbia, to Incheon International Airport near Seoul:


A Korean Airlines Boeing 777 en route from Vancouver to Seoul was diverted to a nearby Canadian Forces base after the airline’s U.S. call center received a bomb threat.

Korean Airlines said in a news release that the call center received the threat today (Hawaii time) about 25 minutes after take-off from Vancouver International Airport. Airline officials said they decided to turn the aircraft around.

Massie said the same Korean Airlines flight out of Vancouver faced a similar threat on Monday and the all clear was given after a two hour search. He said Monday’s threat was called in somewhere besides the airline’s U.S. call center but he declined to say where.

Actually, I might be able to imagine their horror: Sometime in the 1990s I was on a Northwest flight from Kimpo to Tokyo that made an abrupt U-turn over the East Sea (Sea of Japan). They forced us to stay on the tarmac in a hot plane without air conditioning for about two hours before they had us deplane. We were told engine parts had fallen out an air duct.

Um, anyway. I wonder how many of these threats that KAL gets. I mean, two in three days. Sheesh.

Email ThisBlogThis!Share to TwitterShare to FacebookShare to Pinterest
Labels: KAL