"These buoys and bottles are new... and suspicious" 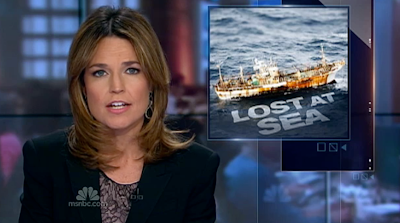 NBC News on Friday had an interesting story related to the Tohoku earthquake and subsequent tsunami and Fukushima nuclear disaster that occurred over a year ago.

It seems that significant pieces of debris that were washed out to sea during the tsunami have made their way across the Pacific Ocean. The largest and most notable — and the most hazardous — has been the "ghost ship" that had been drifting toward the North American coastline. The US Coast Guard decided to torpedo it and let it sink in waters 6000 feet (1800 meters) deep.

The ghost ship is fascinating enough (and it's too bad they couldn't sink it in a more favorable location so that it could become an artificial reef and perhaps a diving site), but what got me interested enough to post this was their discussion of the everyday items from Japan that they've noticed coming ashore.

One biologist in Sitka who routinely helps with cleaning up the beaches around Sitka, in the Alaska Panhandle, says they've noticed more and more debris. Quoting NBC's Miguel Almaguer, "These buoys and bottles are new... and suspicious."

Not to make light of their obvious plight, but here's an example of the suspicious stuff from Japan: 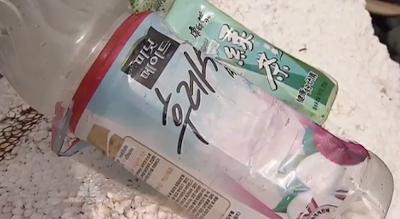 Yup. That's a Korean bottle of Minute Maid Fresh juice (looks to be apple). To be fair, they said that Japanese debris washes up on their shore all the time (something about the geography makes it prone to collecting floating garbage) and they would need to verify if this is from last year's tsunami. Hint to NBC News: The Korean bottle probably isn't, but go ahead with the geiger counter anyway.

Sure, it's not entirely implausible that the Korean bottle came from northern Japan. A realistic scenario would be that someone from Japan visited Korea and brought this bottle back on the plane as a beverage or even a souvenir, but my guess is that it actually floated over from Korea.

I've done beach cleanup along northern Oahu long before the tsunami, and it's easy to see Japanese, Korean, and even Chinese goods washed upon the shore and partly buried in the sand. Lest you think it's only East Asians dumping things in the ocean, we see lots of stuff from the US (much of it local, but some of it from the Mainland).

And except for the local stuff, I'm not so sure that these are examples of people carelessly dumping things into the ocean. I remember The Lost Nomad used to put up atrocious pictures of garbage dumped along rivers or reservoirs where he'd fish.

I had assumed that 100% of that had been left by some careless person, like the people who toss their cigarette butts into subway vents, but after experiencing some minor flooding due to torrential rains that are frequent during Korea's changma (rainy season), I've concluded that a large portion, perhaps even the vast majority, comes from garbage and other debris that had been secured being blown away or washed away by heavy rain.

Of course, that doesn't make it any healthier to wildlife or the environment, but at least it restores some of my faith in humanity. That is, until I see a smoker toss a cigarette butt into a subway vent again.