Jealous that the Associated Press gets to pretend they're the KCNA, Reuters has decided to pretend they're Arirang. They're reporting on the Great South Korean Prison Robot Test with a video that looks like it was put together by the Media Club at my high school.

Monster Island readers are already familiar with the prison robots (see here and then here), so they know the robots' capabilities and skill set: they can detect suicides and violence, for example, but not spelling errors... 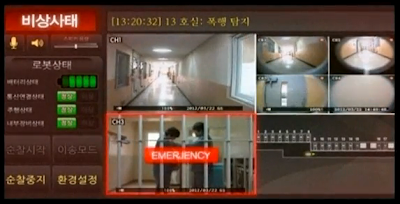 Man, that's just plain embarrassing. This is Reuters, dude. That means it will be seen by at least a dozen or so British people.

Anyway, I just noticed that Reuters's music at the start of each video segment sounds a lot like the Onion's.