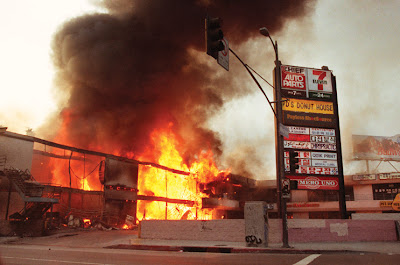 April 29 (which is today in Hawaii and California, but yesterday in Korea) marks the twentieth anniversary of one of the worst outbreaks of domestic violence in modern American history.


Three years ago, I wrote about as thorough a post as I care to about this terrible event, so just go there. It also addresses Cho Seunghui and the Korean-American (and South Korean) reactions to that mass killing:

White cops acquitted despite being videotaped.

I'm somewhat simplifying things, of course, but there's a point: Prior to that, the only conceivable connection between Rodney King and anything or anyone Korean was that he was driving a Hyundai Excel (supposedly at 100 mph).

Given how badly the Los Angeles area Korean-American community was blindsided, I'd say it was prudent for kyopo across America (and other Asians, as the JACL said) to be at least a little concerned about a backlash against Koreans following the Seung-hui Cho massacre, though that sentiment was roundly mocked in the K-blogs two years ago.

Some other bloggers also have posts about twentieth anniversary, including the always thought-provoking The Korean. His includes a link to a KoreAm piece on oral histories of "4.29" (culturally and linguistically Koreanized as sa•igu) and a map of "destroyed and looted" businesses (which, methinks, should be two separates maps).

One of the KoreAm links includes a statement by Angela Oh, whom I'd skewered in that three-year-old link. And while what happened to the Korean-American businesses was a tragedy and a wake-up call (on many different levels), a year or so after the fact they were saying that forty percent of the businesses that were destroyed were Korean-owned businesses, which made up thirty-seven percent of all businesses. 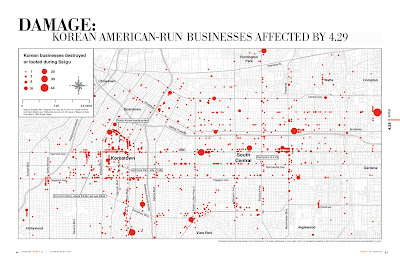 That represents, statistically, near parity when it comes to destruction of Korean-owned businesses versus businesses owned by others, which calls into question how severe the "targeting" of Korean businesses actually was. (Yeah, yeah, that kind of statement is not going to win me any points with anyone.)

In other words, the angry crowd that was hell-bent on venting their anger and rage was rather indiscriminate in its self-infliction. (And since many of the accounts say that outsiders in various neighborhoods were doing the damage, how would they know which businesses outside of Koreatown were owned by Koreans and which were not?)

Elsewhere in the K-blogosphere, ROK Drop also has an anniversary post that also addresses that damage to the Korean-American community and the role the Latasha Harlins shooting death (at the hands of store owner Soonja Du) played in fueling anger between Blacks and Koreans. [UPDATE: The Marmot's Hole has a short post on 4.29 that actually links to this one.]

The Los Angeles Times has an excellent video interview of staff photographer Kirk McKoy, who was at ground zero (the intersection of Florence and Normandie Avenues) during the riots. The LAT also has an op-ed on the epic failure of the LAPD to protect and serve as the violence started and spread. 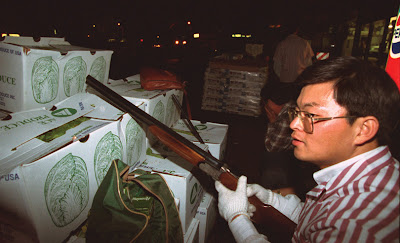 The LAT also has a list of the dozens of dead from the three+ days of rioting, along with a description of what happened. These details belie the claim made by self-appointed Korean-American community leader Angela Oh in the KoreAm piece that "it was very specific to Koreans... Not to Chinese, not to Latinos, not to African Americans... It was just really clear that it was specifically toward Koreans," since the deaths include loads of Hispanics and people like 25-year-old Thanh Lam:


Lam was leaving his family's market in Compton, which had been looted and burned the night before. The traffic signal at Willowbrook Avenue and Alondra Boulevard had turned yellow, and Lam slowed to a stop.

A car bumped him from the rear and pulled up in the next lane. At least two gunmen leaned out with handguns and began firing. One bullet shattered the truck's window; a volley of shots ripped into the cab. Four bullets hit Lam, and within minutes he was dead.

The one Korean-American death was the tragic shooting of Edward Song Lee:

Edward Song Lee, an 18-year-old Asian man, was shot and killed Thursday, April 30, 1992, in Koreatown. Lee, a Korean American, was attempting to protect shops near 3rd Street and Hobart Boulevard when he was apparently shot by fellow Korean Americans who mistook him for a looter.

In fact, Edward Lee was the only Asian person killed in Koreatown. The others were White or Hispanic, people like thirty-year-old Patrick Bettan:


Bettan, a security guard at a Koreatown mini-mall in the 2700 block of West Olympic Boulevard, was accidentally shot by a co-worker during a looting incident.

Don't get me wrong, even though I believe careless gun handling contributed to these people's deaths, Mr Lee and Mr Bettan and the others were exceedingly brave for being where they are and their deaths ultimately fall upon the heads of those who had come to do damage and harm.

As a California native with one foot in the Korean-American community and a few toes still in Compton, I still find the whole thing just so depressing. The warning signs were there long before, but people ignored them. All sides have some serious soul-searching to do, but instead we still get a lot of finger-pointing.