On student loans and public health responsibilities (alternate title: It's things like this that make it impossible for me to vote Republican) 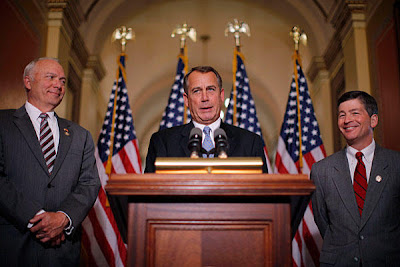 Republicans and Democrats both supposedly agree that it would be a bad idea for interest rates on student loans to suddenly double from the three-percent range to 6.8 percent. But it is the Republicans' plans for how to pay for this that has me scratching my head and wondering what planet they live on:


The Obama administration today threatened to veto the GOP-proposed House version of a student loan bill because it would repeal a fund for preventive health services.

“This is a politically-motivated proposal and not the serious response that the problem facing America’s college students deserves,” the White House said in a statement. “If the president is presented with H.R. 4628, his senior advisers would recommend that he veto the bill.”

The $5.9 billion bill, which the House is debating today, would prevent interest rates on student loans from doubling July 1. To pay for it, however, the GOP version would cut the Prevention and Public Health Fund, a program created as part of the president’s health care reform act.

“Women, in particular, will benefit from this Prevention Fund, which would provide for hundreds of thousands of screenings for breast and cervical cancer,” according to the White House.

The veto threat comes after the president spent the week publicly campaigning for Congress to extend a 2007 law that cut student loan rates to 3.4 percent. If Congress does not act, interest rates will double to 6.8 percent this summer.

Seriously, this is wrong on so many levels. First of all, after the trillion-dollar-plus war in Iraq, when did the GOP get so picky about a mere $5.9 billion, hardly a drop in the bucket.

Second, how can it possibly help them in the upcoming election if they're trying to look sinister and out of touch. I mean, really, cutting preventive care? Can you get any more evil?

Third, by cutting a component of Obamacare that helps keep health care costs down and provides maximum benefit not just in terms of expenditures but also in quality of life, you're highlighting the positive elements of this plan that so many Americans are on the fence about precisely because they don't know about stuff like this.

At the same time, you're showing that you are more interested in helping oil companies (the subsidies for whom President Obama would want to eliminate in order to pay for the cheap student loan rates). Forcing the American people to choose between affordable college or preventing breast cancer is about the stupidest thing they can do.

It also makes your crusade against Obamacare look wrongheaded, foolish, and petty.

Anyway, to switch gears, the one thing I would like to say is that to truly reform the whole college cost thing, we may actually need a reduction of student loans in favor of grants, scholarships, and other pay packages (divvied out on the basis of need and/or merit at the neighborhood level).

Student loans drive up the cost of education (even after adjusting for inflation, college costs are three times what they were three decades ago). Universities charge what the market will bear, and it bears more because students (and their parents) are getting free money now that they will have to pay off in some distant future. Of course they'll take the money and pay the tuition that has shot up 10% from the previous year, itself a rise of 8 percent from the year before that, etc., etc.

If it were up to me, I'd create national service universities, or at least national service scholarships, where the students work twenty hours a week (or more) running the university in various capacities in order to cover tuition. Perhaps room and board could be part of that or on a separate track, but offered at a reasonable cost. Alternatively, contracts that put them in teaching jobs or other socially beneficial work after graduation could be a means of paying for college.

Universities would have incentives to keep costs down, since they can't rely on atrocious tuition increases each year, and they could earn money to pay for professor salaries, buildings, overhead, etc., through government or private grants for research and the selling of services (provided by students) or use of facilities.

This is not terribly unlike what happens in some other countries (including Korea, in some universities), and it would put an end to the absurd notion of having fresh college grads in their early twenties saddled with $100,000 of debt (or more) that prevents them from buying a home or doing other economically productive activities, while forcing themselves to lock into a money-paying job early on rather than exploring other opportunities that might benefit themselves or society at large.

Certainly for some, a college education paid for with student loans is a far better choice than not going to college at all. But they would benefit even further if they were able to go to college and get out on the other end debt free.