Remember last year, when their Chinese benefactors sent the North Koreans on a Capital Mystery Tour of the United States so they could learn how a market-driven economy operates? Well, recent news suggests they were especially taken by their trips to a certain Sweden-based do-it-yourself furniture chain.

You see, it seems that some experts believe that the parade of ICBM missiles and weaponry we've seen at post-missile launch parade in Pyongyang are fake. Like the electronic props you see when you walk through an Ikea showroom.

Now, let's not get ahead of ourselves and start depicting North Korea as a paper tiger. There is, after all, a whole host of artillery that could do an incredible amount of damage if it were to rain down wrath onto Seoul (my home) and its northern suburbs of P'aju, Ilsan, Munsan, etc (which themselves have over a million residents). And let's not forget that our friends in China seem to be surreptitiously helping them out with their missile ventures. (Would a fake Ikea store in China contain real electronics? Ooh, wrap your head around that one!) 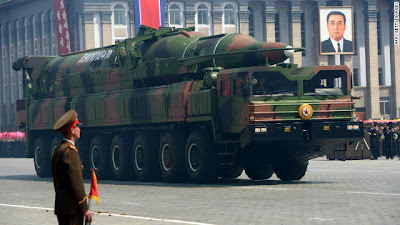 Nevertheless, this accusation of missilery fakery has been fodder for late-night comics, including this bit on Conan O'Brien (HT to DA):

Nevertheless that semi-earnest effort on their part just makes it even funnier.