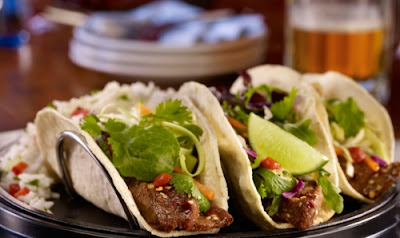 Remember back in the day, when the phrase "Korean taco" was a naughty euphemism for the land down under?

That was back before the Kogi Taco Truck graced the Big Orange, before the words "Korean" and "fusion" were ever uttered in the same sentence, other than references to Pyongyang's nuclear program.

But with success comes imitative flattery, and eventually things that are hip and cool (and delicious) go mainstream.

For the Korean taco, that day has arrived: T.G.I. Friday's has announced that Korean steak tacos are being added to their fare of flare:


Whether looking for fresh, seasonal dishes, like the Strawberry Fields Salad or Caribbean Spiced Rum Ribs, or to indulge in dishes that follow current flavor trends, like the Korean Steak Tacos or Salted Carmel Cake, T.G.I. Friday's® guests now have 17 more reasons to come in to Friday's and celebrate. The 17 new dishes and mouthwatering menu favorites add value and variety for Friday's guests, including new vegetarian options and more shareable appetizers.

Frankly, I'm shocked. First, I had no idea that T.G.I. Friday's still exists outside of South Korea and Guam (I guess their business model is that if they just stick around long enough, 1990s nostalgia will eventually be all the rage). Second, Korean food really seems to be going mainstream on the Mainland.

Ahh, I don't know why I'm bashing them. In fact, back in Seoul I've long enjoyed going out to the various "family restaurants" with friends and family: T.G.I.F.'s, Outback, Bennigan's, etc. I haven't been to Hooter's, but I did hit the Hard Rock once or twice and even the thankfully defunct Planet Hollywood. Heck, I actually remember when Coco's was the one and only option available (now that is 1990s nostalgia).

So does this mean that Korean food has "arrived" in America? Here in Hawaii, "Korean ribs," "bulgogi" (or some variation of the spelling), etc., are household terms, but the Aloha State is the crossroads of the Pacific, so that doesn't count (the Hallyu trend here predates the Hallyu trend from Korea).

If I end up in a T.G.I.F's anytime soon (my mom likes to go there for the lunch specials when I'm on the Mainland and since she's paying, I'm not complaining), I might try one of the Korean appetizers, but I think I'll stick with chasing around Kogi's naranja truck (naranja means orange, for you Spanish-impaired readers, a nod to the O in OC).


The tacos were served nestled in foil, in a wire rack. The chunks of steak were tender; the dominant taste was soy sauce, but it was fairly mild. The meat also had a faintly sweet undertone, and bore some tinges of caramelization.

And that was basically the good news. Everything was wrapped in taut, sandpaper-like corn tortillas. I didn't taste ginger – though that may have been drowned out by the liberal globs of sriracha – and I saw no cilantro or basil, but my tacos were topped with a lettuce mix that included plenty of arugula.

Arugula! On a Korean taco! I could hear grandmothers from many different cultures howling as I ate.

I later tweeted Roy Choi, the acclaimed chef behind the Kogi truck. Was he going to try the T.G.I. Friday's tacos? "Wasn't planning on it," he tweeted back.

Does this dish show that Korean food is so common it now has the honor of being watered down into mediocre fare acceptable to the masses? That's nothing to celebrate. But the general prospect of more people discovering flavors? I'll raise a real bulgogi taco to that.

Yup. For you food purists who think Korean tacos shouldn't be served anywhere except from a truck, this is the price you pay for trying to popularize something you love, enough that it pops up in a neighborhood eatery so you don't have to drive twenty miles to get it: eventually someone tries to make it accessible to the hoi polloi in ways you might not approve. But isn't that phenomenon where Korean tacos come from in the first place?