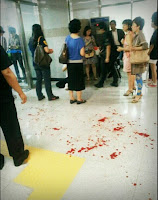 A ten-minute "rampage" that occurred on the subway system in Ŭjijŏngbu (Uijeongbu) was substantial enough that it got picked up by the Associated Press and ended up in the likes of the Washington Post.

I'm not sure if the 39-year-old Mr Yoo deliberately set out that day to stab or slice a bunch of people with a boxcutter (the same type of device the terrorists used to gain control of the aircraft during the 9/11 attacks) or if something just set him off and that's what he grabbed. Whatever the case, it would seem Mr Yoo is mentally ill, and it would almost be blogger malpractice to not point out how authorities in Korea need to do a better job of seeking out such individuals and getting them help, rather than just ignoring them and hoping they'll go away.

Of course, the government is already trying to do a bit of proactive preventive care in this regard, with its plans for mandated mental health checkups, which hopefully will remove (or at least bypass) much of the social stigma against being michŏtta ["crazy"] that prevents so many people from getting the help they need.

From the AP, via WaPo:


A man wielding a box-cutter stabbed or cut eight people at a subway station just outside of South Korea's capital after a teenager confronted him for spitting at him, police said Sunday.

No one died in the 10-minute rampage Saturday and the injuries weren't life-threatening, according to three police officers who spoke on condition of anonymity because they weren't authorized to talk to the media. Police arrested a man running away from the station in Uijeongbu, which is home to U.S. and South Korean military bases, the officers said.

Police identified the suspect as a 39-year-old man surnamed Yoo.

Yoo began wielding a box cutter at an 18-year-old man surnamed Park inside the train when the victim confronted Yoo for spitting at him, police said. Infuriated when Park said he would call police, Yoo began brandishing the cutter on a train and then on a station platform until he was arrested, Uijeongbu Police Station said in a statement released Sunday.

Yoo, who is unemployed and lives alone, was on his way to find work in Seoul on the subway, police said.

The Korea Times has more detail on the story, referring to Mr Yoo as a "day laborer," suggesting he is a generally unemployed which would fit with my theory of someone suffering from untreated mental illness who has fallen through the cracks — until he lands on someone.

The KT report includes the typical reporting of what the perpetrator says set him off, in this case "being told off." As an aside, the risk in reporting such claims is that it can easily seem as if the Korean news media is excusing the criminal behavior or at least offering mitigating circumstances that suggest reduced punishment or release, when in fact not such thing is intended. It is akin to how American news media constantly refers to alleged criminals allegedly having done things — even when we know perfectly well they did it — as a nod to the criminal justice system's ideal of "innocent until proven guilty" in a court of law.