The old chestnut that "Koreans hate Japanese!", when used as an explanation for just about anything, borders on intellectual laziness.

This piece in the Wall Street Journal underscores that point, suggesting that opposition to the now-scuttled intelligence-sharing pact between Seoul and Tokyo had a lot more to do with disdain toward all things Lee Myungbak than animosity toward all things Japanese:


The study then asked respondents whether they would change their opposition if Japan offered a formal apology to Korea for its war crimes—an act often portrayed in Korea as a requirement for better relations. Around 70% said no, suggesting a relatively weak link between bitterness towards Japan and opposition to the pact.

The survey also found that opposition to the agreement was strongest among those in their 20’s to 40’s and weaker among older generations. But when asked about their views about Japan, favorability towards South Korea’s neighbor was stronger among the younger age groups.

A stronger correlation to opposition to the pact was found in the approval ratings for President Lee; 88% of those that said they strongly disapproved of President Lee also opposed the information pact. The survey also showed that support for Mr. Lee remains stronger among the older generations, who are warmer towards the military pact.

Of course, many of the young people opposed to the pact, while not anti-Japanese per se, are being influenced by the pro-Pyongyang chinboista groups that are anti-Washington and anti-Tokyo in their outlook. Simply put, a stronger ROK-Japan relationship undermines their goals. 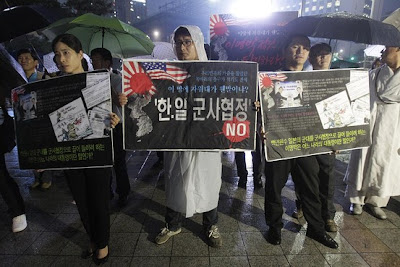