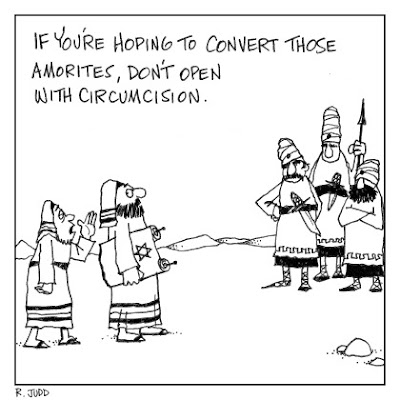 The debate over circumcision (which to me sometimes to take on anti-Christian overtones) is an interesting one in the public health field. It will be interesting to note how this plays out in Korea, where heavily Christian and generally Western-influenced medical practitioners have made circumcision widespread (some getting the procedure as tweens, teens, or young adults, as I understand).

Korea's case also speaks to how denying the case may be penny-wise and pound-foolish, as the article suggests. In a country like the United States, the insurers when a child is born or young (including the government) do not reap the benefits of preventive care if they are not insuring that same person when he/she is older. From a bottom line perspective, they have no incentive to pay for circumcision, unless they can convince all the other insurers to do the same.

By contrast, in Korea and many other countries with a more nationally centered health coverage structure, the state benefits in the long term from such preventive care. In fact, those who have set up Obamacare (as well as the Heritage Foundation folks who proposed it a decade and a half earlier) know that this is where a significant amount of savings comes from but a strictly private system with low regulation will likely never impose that on its own.


Declining rates of circumcision among infants will translate into billions of dollars of unnecessary medical costs in the U.S. as these boys grow up and become sexually active men, researchers at Johns Hopkins University warned.

In a study published Monday in the Archives of Pediatric and Adolescent Medicine, a team of economists and epidemiologists estimated that every circumcision not performed would lead to significant increases in lifetime medical expenses to treat sexually transmitted diseases and related cancers — increases that far surpass the costs associated with the procedure.

Circumcision is a hotly debated and emotional issue in the U.S., where rates have been falling for decades. In the 1970s and 1980s, about 80% of baby boys were routinely circumcised in hospitals or during religious ceremonies; by 2010, that figure had dropped below 55%, according to the Centers for Disease Control and Prevention.

But in the last decade, studies have increasingly shown that removing the foreskin of the penis has significant health benefits, said Dr. Aaron Tobian, senior author of the new study.

Three randomized trials in Africa have demonstrated that circumcision was associated with a reduced risk of contracting HIV, human papillomavirus and herpes simplex in men. One of those studies documented a reduced risk of HPV, bacterial vaginosis and trichomoniasis in the female partners of men who were circumcised.

Circumcision is believed to prevent STDs by depriving pathogens of a moist environment where they can thrive. The inner foreskin has been shown to be highly susceptible to HIV in particular because it contains large numbers of Langerhans cells, a target for the virus. ...

If circumcision rates were to fall to 10% — which is typical in countries where insurance does not cover the procedure — lifetime health costs for all the babies born in a year would go up by $505 million. That works out to $313 in added costs for every circumcision that doesn't happen, the report said. ...

To Tobian, the message is clear: Government efforts to save money by denying coverage for circumcision are penny-wise but pound-foolish.

"The federal Medicaid program should reclassify circumcision from an optional service to one all states should cover," he said.

Of course, the cost effectiveness argument is only one side of the issue. There's a whole school of thought whereby circumcision is seen as a form of genital mutilation. Frankly, I've never seen in that way, and I certainly am not scarred by the procedure, but I guess I can see where others are coming from. I guess.