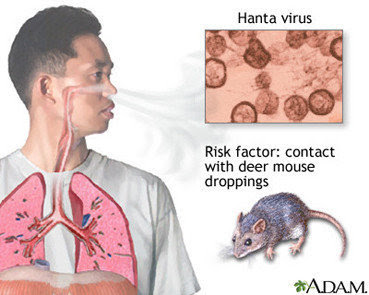 Did you know that the infamous and deadly hantavirus gets its name from a river in Korea? The Hantan River, to be precise.


During the Korean War, several thousand United Nations troops were stricken with a severe, mysterious disease called Korean hemorrhagic fever. It was characterized by high fever, internal bleeding, kidney failure and, frequently, death. The source of the illness remained a mystery for a quarter of a century until 1978, when South Korean virologist Ho-Wang Lee isolated and identified the causative virus from a specimen found in the Hantaan River area. The group of viruses it represented have since been called hantaviruses, after the Hantaan River virus. It was a member of this genus that caused the deaths of at least two visitors to Yosemite National Park this summer and led the National Park Service to warn 1,700 other visitors of the potential risk.

Hantaviruses are lethal RNA viruses of the family Bunyaviridae. They are spread primarily by mice -- particularly deer mice -- and related rodents and can be contracted by bites, but most commonly occur when a victim breathes in air contaminated with rodent urine or droppings -- such as in a cabin that has been empty for some time. In Yosemite, the encounters with the virus are believed to have occurred in permanent tents used to house visitors in the Curry Village area. There have been isolated reports of human-to-human transmission of the virus, but that appears to be extremely rare if it does indeed occur.