Americans toss out as much as 40% of their food 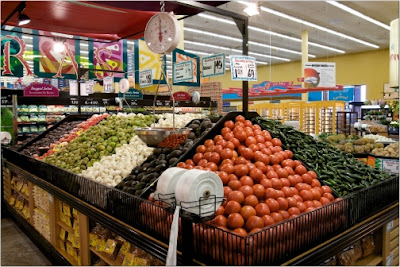 If we Americans were to wrap up all the food we waste and send it to North Korea, would that prolong the regime — by allowing that murderocracy to keep more resources for their selfish selves — or hasten its demise, as more and more of the citizenry hoi polloi get fed up (literally) that they're eating someone else's garbage?


Americans are throwing out nearly every other bite of food, wasting up to 40% of the country's supply each year – a mass of uneaten provisions worth $165 billion, according to a new report from the Natural Resources Defense Council.

An average family of four squanders $2,275 in food each year, or 20 pounds per person per month, according to the nonprofit and nonpartisan environmental advocacy group.

Food waste is the largest single portion of solid waste cramming American landfills. Since the 1970s, the amount of uneaten fare that is dumped has jumped 50%. The average American trashes 10 times as much food as a consumer in Southeast Asia, according to the Natural Resources Defense Council.

Such profligacy is especially unwarranted in a time of record drought, high food prices expected to get higher and families unable to afford food, according to the council. Efforts are already in place in Europe to cut back on food waste.

But American consumers are used to seeing pyramids of fresh produce in their local markets and grocery stores, which results in $15 billion annually in unsold fruits and vegetables, according to the Natural Resources Defense Council. In restaurants and home kitchens, massive portions often end up partly in the trash.

Half of American soil and many other key resources are used for agriculture – the Natural Resources Defense Council says wasted food eats up a quarter of all freshwater consumed in the U.S. along with 4% of the oil while producing 23% of the methane emissions.

In its report, the council urges the government to set a target for food-waste reduction. Companies should look for alternatives in their supply chain, such as making so-called baby carrots out of carrots too bent to be sold whole at the retail level.

The study also asks Americans to learn when food goes bad and to become less averse to buying scarred or otherwise imperfect produce. The average consumer should also save and eat leftovers, researchers said.

Frankly, I think we would have to see some really high food prices before most Americans start buying the flawed fruits and vegetables they typically eschew. Ditto with the beef and pork that take up so many resources. If we could curb meat consumption and get consumers to buy more aesthetically imperfect produce, we could go a long way toward resolving this issue. But of course, that's nanny-state socialism.