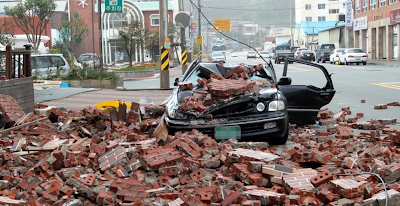 In the US, the big weather news is Hurricane Isaac postponing the Republican National Convention in Tampa and possibly hitting Louisiana on the seventh anniversary of Hurricane Katrina hitting New Orleans (with damage to earthquake-reeling Haiti a secondary concern). The message is clear: Run as fast as you can from anything named Isaac.

But out in Asia, Typhoon Bolaven is wreaking havoc, first on Okinawa and now the Koreas (while Typhoon Tembin battered Taiwan). The above picture from BBC of a brick building having been felled on Wando Island by the typhoon has me scratching my head (not to mention that it turns the entire premise of The Three Little Pigs on its head). 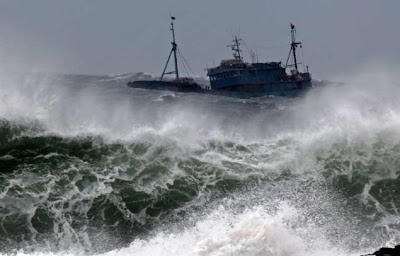 The typhoon has reportedly ripped apart Chinese fishing boats off Korean waters near Cheju-do Island, leading to at least five deaths there and three deaths on the mainland. The above photo shows other Chinese vessels riding out the storm.

The capital region is apparently being spared the typhoon's hardest blows, but expect a lot of rain, wind, and slippery or flooded roads with idiot drivers. Ironically, bad weather like typhoons on Korean roads can actually reduce deaths because traffic jams force drivers to go slowly, whereas California drivers tend to speed up when conditions are bad so they can get out of the inclement weather more quickly.

So folks, stay dry and warm. Enjoy nature's display from your apartment window.