Are you ready for some football (coverage)? 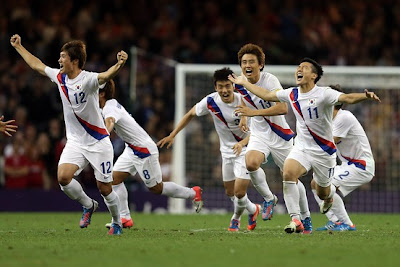 It is one of those rare times when South Koreans are happy to come in second place — or even third. The Wall Street Journal is reporting how ecstatic people in South Korea are to have defeated Olympic hosts GB (that would be Great Britain) in the Olympic soccer quarterfinals to face Brazil:


South Korea hit its gold medal target at the Olympics over the weekend, but the big news locally was about a win that only takes the country into a semi-final.

The front pages of all Monday’s major national newspapers carry pictures of the jubilation in the men’s soccer team after they beat host nation Great Britain on penalty kicks in their Olympic quarter-final late on Saturday night.

The victory takes South Korea into the penultimate stage of Olympic soccer for the first time ever and conjures up memories of a similar historic win, also on penalty kicks, against Spain in the quarter-final of the World Cup a decade ago.

What badminton scandal? What fencing unfairness?

The lesson is: Don't misunderestimate ROK Soc (or anything else in Korea, for that matter). Judging by this story in the Washington Post, the Brazilians don't plan on making the same mistake (maybe):


The only top contender still left in the men’s Olympic football tournament, Brazil has no excuse to leave the London Games without the gold medal. First, though, it will have to get past South Korea in the semifinals on Tuesday.

Brazil brought most of its top players to the Olympics and has been dominant so far, getting more wins and scoring more goals than any other team. South Korea, meanwhile, just barely made it through the first stage, backed by its strong defense, but is hoping for a second consecutive upset to add to its surprise elimination of host Britain in the quarterfinals.

The winner of the match at Old Trafford will play for the gold against either Mexico or Japan, which will face off in London in the other semifinal.

“There is an extra bit of tension in the matches now,” Brazil coach Mano Menezes said. “You are playing to try to get to a final, it’s different.”

It would be Brazil’s only third Olympic men’s football final, and first since the 1988 Seoul Games. Brazil won the silver medal in Seoul and also four years earlier at the Los Angeles Games. Brazil got the bronze in 1996 in Atlanta and in 2008 in Beijing, when it lost the semifinal to Lionel Messi’s Argentina.

“We know that our responsibility is increasing as we get closer to the final,” Brazil captain Thiago Silva said. “And to get there we know that we will have a very difficult task trying to beat South Korea.”

While a cross-strait Japan-Korea rivalry match would be fun, I think most South Koreans would be satisfied even if it didn't get any further than this. Certainly, no one can accuse Korea Republic of having gotten this far by playing off of home-field advantage, an oft-grumbled narrative following wildly unexpected success in the 2002 Korea/Japan World Cup.

Now if only I can figure out how to watch the Korea-Brazil match live without having cable TV.