The Main Event (a non-event?) 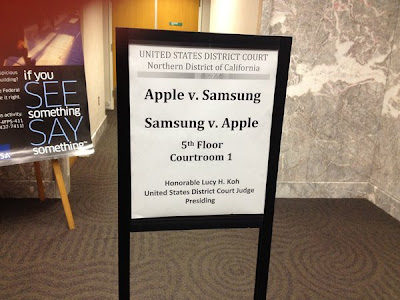 You'd be forgiven if you think all the fights were watching are in London, but the Apple-versus-Samsung and Samsung-versus-Apple fights are gearing up in San Jose.

Frankly, I like Samsung's opening just because I not only agree with it, but I've been running around saying it:


Samsung wants you to know it isn’t a copycat.

During his 90 minutes addressing the jury in federal court in San Jose, Verhoeven repeatedly insisted that an average person could tell the difference between Samsung’s mobile devices and Apple's, and said Apple "had no right to claim a monopoly" on a rectangle with a large screen.

And I say this as a long-time consumer of Apple products who loves his iPad 2 big time (and not just because I won it for free).

I have a friend who is a free-lance lawyer for Samsung on this case, but that's another post for another time.

Anyway, I hope these two frenemies kiss and make up soon. It's like watching my mom and dad fight.