Choe Sanghun at the NYT has a thorough article on Kim Jong-un's new bride, the gracious Ms Ri:

The South Korean spy agency said that Ms. Ri had been to South Korea as a member of the North’s cheering squad in support of athletes competing in a track meet in 2005. South Korean photographers dug up the photos of Ms. Ri, noting her poise and smile [right].

Mr. Kim’s father also seemed to have a soft spot for performers: the current leader’s mother, Ko Young-hee, was a dancer with Pyongyang’s Mansudae Art Troupe. Kim Jong-il’s first wife, Sung Hae-rim, was a movie actress, and the woman who was believed to have been his consort in his final years, Kim Ok, was a pianist.

Defectors from North Korea say it is common for children of the top leadership to pick wives from Pyongyang’s artistic circles. The performers, who often do shows exclusively for the party and military elites, are selected in a rigorous audition process, and their families’ ideologies are investigated in a process that can take months. Talent and looks alone cannot guarantee entry into what is considered a privileged class. The fact that Ms. Ri was apparently allowed to travel abroad means that she was trusted by North Korea’s leaders, they said.

This is interesting for a number of reasons. For starters, that group of North Korean cheerleaders/performers who visited Inchon for the pan-Asian athletic meet supposedly (according to some North Korea watchers) ended up in the gulag because they'd become tainted by the West/South.

Also, given that last paragraph, if I were Kim Jong-un something like this is what would be on my mind (just move it down one generation): 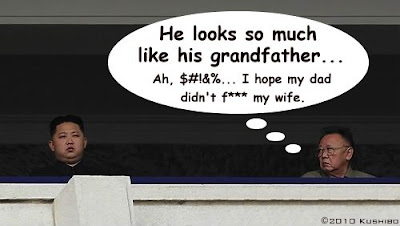