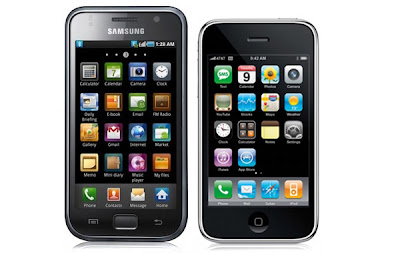 In addition to sounding the death knell of the "real name system" for on-line users, the ROK judicial establishment has chimed in on the Samsung-Apple frenemy battle, saying that both companies ripped each other off. (They also said that Samsung could not sell its older models of the Galaxy and Apple could no longer sell the older models of the iPhone and iPad.)


A Seoul court has ruled that Apple and Samsung violated each other's patents, has prohibited the companies from selling the infringing devices in South Korea, and has awarded both companies fairly insignificant damages, the Wall Street Journal reported this evening.

The three-judge panel in the Seoul Central District Court also ruled that there was "no possibility" that smartphone buyers could confuse devices from the companies, the Journal reported -- an interesting fact given the headline-grabbing trial currently before a jury in Silicon Valley. In that trial, which is just one part of the international struggle between the two companies over intellectual property, Apple has raised the issue of consumer confusion.

"There are lots of external design similarities between the iPhone and Galaxy S, such as rounded corners and large screens...but these similarities had been documented in previous products," Reuters quoted one of the judges as saying in the Seoul case.

"Given that it's very limited to make big design changes in touch-screen based mobile products in general...and the defendant [Samsung] differentiated its products with three buttons in the front and adopted different designs in [the] camera and [on the] side, the two products have a different look," Reuters quoted the judge as saying.

The judge also said company logos on the devices would make it hard for consumers to mix them up, and that buyers also look at price, brand, applications, operating systems, and services when choosing a product, Reuters reported.

True that. I guess the fact that Samsung's and Apple's logos are so different makes the whole "whose product is this?" confusion sorta moot.

Unlike, say, Honda and Hyundai (car buyers seem to be confusing the Sonata with the Accord).

Anyway, I have been intrigued by the possibility lately that Samsung and Apple have decided (independently or collectively, I'm not sure) to keep this frenemy battle going because it is free publicity.