"Because I'd heard such wonderful things about the place." 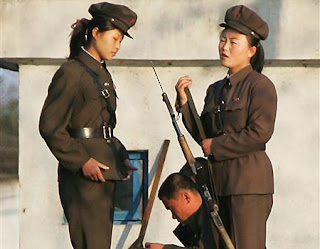 [above: Pyongyang has only recently discovered that posting hot border guards along the Tumen River is just enticing people to cross into the country.]

A Bloomberg piece is citing a Korean-language article in the Donga Ilbo that says the mystery American who was detained by North Korean authorities earlier this week:

The man is known to have crossed the border near the Chinese city of Tumen to Onsung in North Korea on Jan. 25.

The U.S. State Department confirmed yesterday that North Korea detained a U.S. citizen this week, the second American known to be held by the isolated communist nation. The identity of the American and the reasons for his detention aren’t known, State Department spokesman P.J. Crowley told reporters in Washington.

Wow. Is unemployment so bad back home that people are seeking jobs with the DPRK military?

I blame Laura Ling and Euna Lee for this. They went on Oprah, told how surprisingly well they were treated at the Pyongyang Palazzo, and now look what's happened. I fully expect Conan O'Brien to show up in Shinŭiju sometime this spring.

UPDATE:
The story is also being carried in the Washington Post. 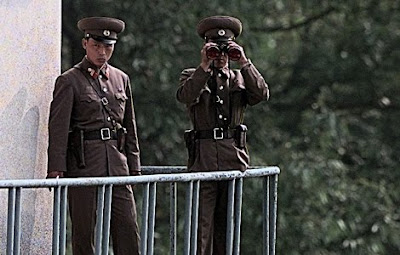 [above: Called a "border greeter," the job of the soldier at right is to look for Americans seeking refuge in the Workers' Paradise. His colleague at left is responsible for putting together gift baskets.]