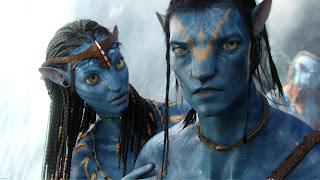 I saw James Cameron's Avatar nearly four weeks ago and I'm still queasy from the experience. Maybe it wasn't a good idea to sit in the fourth row. My young relative (whom I was babysitting) must have an iron stomach, 'cuz he was utterly unaffected. I liked the movie enough for the visuals, but I remember having a simultaneous opinion of "Wow, this is cool" mixed with "Oh, God, when is it going to be over?!"

Anyhoo, I've been told by people in Korea that seats for this futuristic epic are booked so far in advance, that if you reserve your ticket today, by the time you get to see the movie what's happening on screen will be a simulcast of the news. Save your money.

My young relative's dad asked me how I liked it, and I told him it was essentially The Mission set in space (and the future). I see now that other people (e.g., those at The Marmot's Hole) have similar ideas, but with different movies.

I'll have another post on why I think that in another post (and why I think some criticisms of this movie, like it being anti-Marine or anti-American, are hogwash), but for now I'd like to direct your attention to a new poll in the righthand column: Avatar is a set-in-space retelling of what movie?

Email ThisBlogThis!Share to TwitterShare to FacebookShare to Pinterest
Labels: Avatar