Discussion: Would "sharrows" work in Seoul?

The city of Long Beach, California, a community of over a third of a million people sandwiched between Orange County and Los Angeles (and a stand-in for the likes of CSI: Miami and Dexter), is trying to be the most bicycle-friendly city in America. 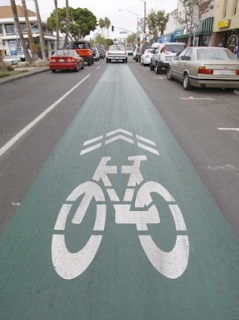 They will be adopting things like "sharrows," green lanes shared by motorists and bicyclists alike. This makes me think of my own time in Orange County, where every main street has a bike line; Honolulu, where bicyclists share the pothole-filled roads with cars at their own risk; and Seoul, where river courses are being turned into cross-city bike highways, but where bikes wouldn't even show up on the mental radar of many drivers, much less their visual scans.

I always thought an elevated system of bike trails over the median of major roads would be a cool feature, but no one ever listens to me, so it never got off the ground. Seoul's "townhall meetings" are always filled with people asking dumb questions about recycling.

So, anyway, here's the discussion question for the day: Would such green lanes as the "sharrows" work in Seoul? Would they work in other South Korean cities? If they wouldn't work (or even if they would), then what ideas could be adopted that would work in Seoul and elsewhere, so that pedaling to work and/or school, at least from the subway station, could be an option?