A tale of two situations

From the Los Angeles Times we have two stories of heroic rescues. With winter storms battering the Southland (that's what we in Southern California call Southern California), there have been rescue workers (firefighters and the like) rescuing people from drainage ditches (paved-over rivers and intermittent streams that help prevent flooding during the wet winter months but which can become raging rivers in a matter of minutes) and, now, canines as well. 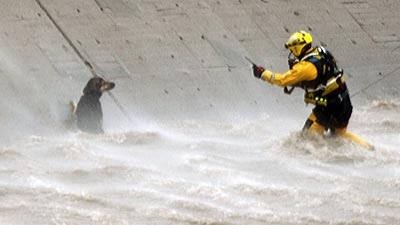 
The rescue of a dog by an army of firefighters and swift-rescue personnel has been the talk of Los Angeles. It was broadcast live on local TV and has sparked much debate.

Should fire personnel have risked their lives to save the dog?

LAFD Capt. Steve Ruda said the firefighter, Joe St. Georges, who rescued the dog has significant bite injuries to his right hand and forearm, and is being treated in the emergency room at L.A. County-USC Medical Center.

“They are waiting for a hand specialist to come in because of the significance of the injuries,” Ruda said. The dog will be tested for rabies, and is being cared for at the county's Animal Care shelter in Downey, he said.


And then from North Korea, we have news that five dead seamen have attained glory by, allegedly, dying while saving portraits of Dear Leader Kim Jong-il and Great Leader Kim Il-sung. Also from the LAT:


Today, the autocratic state offered posthumous awards to crew members who reportedly drowned while attempting to save portraits of leader Kim Jong Il and his late father, Kim Il Sung, as a cargo ship sank in frigid waters off the Chinese coast in November.

North Korean state media announced that the captain and chief engineer of the Jisong 5 were proclaimed labor heroes for their valor. Their families were conferred gold medals and the Order of the National Flag First Class.

Five crewmen died and 15 were rescued by Chinese sailors when the vessel sank 90 miles out to sea in strong winds while heading toward the city of Dalian in northeastern China, according to reports.


As is the case with just about anything political coming from the DPRK, Joshua Stanton at One Free Korea offers his take.

UPDATE:
As I mentioned at ROK Drop, I think such stepped-up efforts to bolster the importance of revering KJI and his father may be a response to the deteriorating situation resulting from the Great Currency Obliteration of 2009. Perhaps John Glionna in the Los Angeles Times could have mentioned that point more strongly instead of looking (as GI Korea at ROK Drop thinks) like he's just uncritically passing along propaganda (which one would hope the LAT readership could recognize as such). 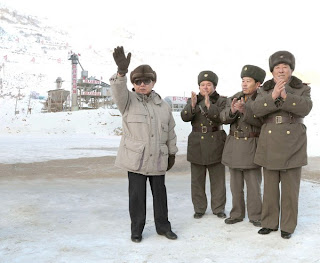 [above: North Korean generals pretend to be dazzled by the dementia-ridden Dear Leader's "holding up the sun" illusion.]