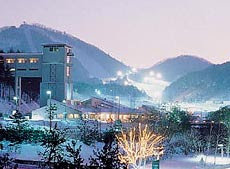 Back in 2003, Pyongchang (평창/; aka Pyeongchang) narrowly lost the right to host the 2010 Winter Olympics to Vancouver, British Columbia (the one in Canada). Four years later, when Russian President Vladimir Putin showed up at the vote and threatened with his eyes to cut off energy supplies to Western Europe, Pyongchang narrowly lost the right to hold the games to the Russian Black Sea summer resort of Sochi, a southern city just a few hundred miles from Chechnya, a major producer of counterfeit American dollars and angry Muslim separatist suicide bombers with a serious score to settle with Moscow.

Indeed, the latter loss — and the footage of Pyongchanger children weeping in front of cameras — brought out a parade of people in the K-blogosphere and elsewhere telling us why this icy and mountainous county in Kangwon-do isn't ready for Olympic prime time. My favorite was by Mr James Card, a seasoned Pyongchang skier, who wrote that the lack of opportunities to urinate from the side of the slopes really hurt Pyongchang's chances:


There are no back-country, off-trail zones and the runs are blocked off in a way that it is tough to find a place to take a mid-slope pee in the woods.

Mr Card's own bladder-control issues aside, there were also concerns that Kangwon-do sometimes lacked piles and piles of snow. Here's what one Marmot's Holeian wrote:


The mountains are not Olympic caliber and the fact that they rely on largely man-made snow makes it a joke. They can plan to build all the hockey rinks and bobsled runs they want, but a good site requires topography and climate, neither of which can be bought.

True, perhaps, but guess what we have in store at Vancouver, which beat out Pyongchang the first time around: some venues are so lacking in snow that it's having to truck it in from other places. From the New York Times:


With seven years to prepare and a budget of about $2 billion, organizers have nearly everything in place for next month’s Winter Olympics in Vancouver.

A dearth of snow, and dim forecasts showing not a flake in the near future and temperatures too warm to manufacture it with machines, have forced Olympic organizers to go to the much-dreaded contingency plan at Cypress Mountain, where six skiing and snowboarding events are scheduled to be held.

The Games will go on, but not without some massive maneuvering. Snow, some man-made and stockpiled during the season, will be brought in from higher elevations by land (snow-moving equipment and dump trucks) and possibly air (a helicopter), according to the Vancouver Organizing Committee.

In some cases straw and wood forms will be used as foundations and topped with snow, further reducing the amount of snow needed. At least one helicopter is already in action, moving straw bales that will give shape to competition courses normally made entirely of snow. 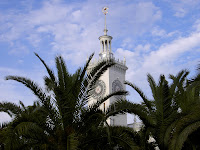 They are assuring us that this is normal, and I believe them. At least Vancouver has some nearby snow to snag; I'm not so sure how Sochi the summer resort (whose train station is pictured at left, behind all those palm strees) will fare in four years.

I guess if all else fails, the games could be moved to Hawaii's Big Island. There's plenty of snow there. 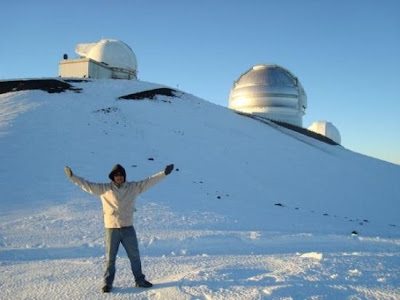