To succeed in today's display market, you've got to be flexible. 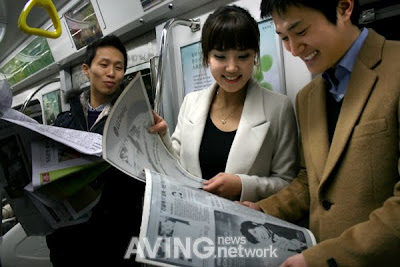 And LG is very flexible. And big: at 25 cm by 40 cm, it has developed the world's largest flexible electronic paper display:


With 0.3mm thickness and 130g weight, it utilizes a metal foil instead of a traditional glass to make itself both flexible and durable. Boasting a high-contrast ratio, it only requires power when the screen is refreshed so the e-paper device features a long battery life.

According to the company, they plan to begin mass production of an 11.5-inch flexible electronic paper screen in the first half of this year via Skiff.


This NYT piece discusses future applications of this type of technology, being pursued by Korean, Japanese, and American companies, which could include roll-up giant screen TVs, updatable newspapers and magazines, ultra-portable Kindle-like devices, etc. And maybe even the end of the laptop.