The only official "double A-bomb survivor" dies at age 93

Tsutomu Yamaguchi might have been called the unluckiest man in the world: He was getting off a streetcar in Hiroshima, Japan, which the 29-year-old was visiting on business, when the atomic bomb known as Little Boy was dropped on that port city on August 6, 1945. He believes he was less than two miles from the blast's epicenter. 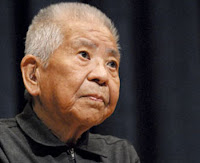 His eardrums busted and suffering burns on his upper torso, he spent the night in a bomb shelter before returning to his home in Nagasaki the next day. On August 9, 1945, he was in his boss's office telling him about the Hiroshima blast when the atomic bomb known as Fat Man was dropped on that city.

Though the number of "twice-bombed people" (nijū hibakusha) may have numbered 165, he was the only one officially designated as such. In interviews later on, he said he thought the mushroom cloud had followed him from Hiroshima.


The mayor of Nagasaki said ''a precious storyteller has been lost,'' in a message posted on the city's Web site Wednesday. Yamaguchi died Monday morning of stomach cancer, the mass circulation Mainichi, Asahi and Yomiuri newspapers reported.

Yamaguchi was the only person to be certified by the Japanese government as having been in both cities when they were attacked, although other dual survivors have also been identified.

''My double radiation exposure is now an official government record. It can tell the younger generation the horrifying history of the atomic bombings even after I die,'' Yamaguchi was quoted as saying in the Mainichi newspaper last year.

In his later years, Yamaguchi gave talks about his experiences as an atomic bomb survivor and often expressed his hope that such weapons would be abolished.

He spoke at the United Nations in 2006, wrote books and songs about his experiences, and appeared in a documentary about survivors of both attacks.


In his later years Mr. Yamaguchi spoke out against atomic weapons, though he had earlier avoided joining antinuclear protests because of the attention he might have attracted, Ms. Yamasaki told The Independent. “He was so healthy, he thought it would have been unfair to people who were really sick,” she added.

Mr. Yamaguchi rarely gave interviews, but he wrote a memoir and was part of a 2006 documentary about the double bombing survivors. He called for the abolition of nuclear weapons at a showing of the documentary, “Niju Hibaku” (“Twice Bombed”), at the United Nations that year.


I haven't had a chance to visit Nagasaki yet, but I've visited Hiroshima twice so far. The museum and adjoining peace park carry with them a heavy theme of the horror of nuclear bombs in general, the lack of necessity of atomically bombing Hiroshima and Nagasaki either as military targets or to end the war, and the need to rid all the world of nuclear weapons today. (They also — as I mentioned here — provide a fair amount of focus on the suffering of Korean victims of the A-bombs.)

Read that last link for my own take on "the Hiroshima narrative" of Japan's imperial history, with which many South Koreans, I believe, would find common understanding. Frankly, I don't know how accurate is the Hiroshima Peace Memorial account's debunking of the military necessity of bombing Hiroshima, but I haven't seen the debunking debunked either. At any rate, the museum is a must-see for anyone visiting Japan.