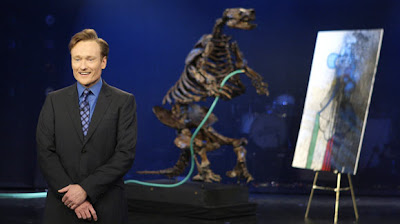 For those of you back in the Land of Han, you may be blissfully unaware of the fallout from the Leno-Conan brouhaha that has erupted after NBC realized it's major mistake in trying to produce television on the cheap by eliminating its third-hour dramas altogether in favor of an earlier hour of late-night TV.

In a nutshell, fewer people watched Leno at 10 (9 Central/Mountain... and Hawaii) than NBC had expected, which meant fewer people were watching the 11:00 news. With fewer people watching the news at 11, fewer were watching Conan at 11:35 (and late-night newbie Jimmy Fallon at 12:35). Local NBC affiliates threatened to bolt or not show Leno at all, and NBC had to do something. Their idea was to bring drama (the televised kind, not the backroom idiocy kind) back to the 10 pm time slot, give Leno half an hour after the news, and then have "The Tonight Show With Conan O'Brien" start at 12:05 (and Jimmy Fallon starting at 1:05).

O'Brien wasn't having it. He balked, then walked (watch his last show here, while Hulu still has it up). It wouldn't be fair to the show, to himself, or to Jimmy Fallon, he said. Now, after the Winter Olympics are over, Leno will be back in the Tonight Show chair at 11:35, nothing will have changed for Jimmy Fallon, and Conan O'Brien has received some $32 million to walk away — and he's not to host any other show until September (and he joked that next week, we should look for "The Andy Richter Show," with Conan O'Brien as a host).

Okay, you following all this? 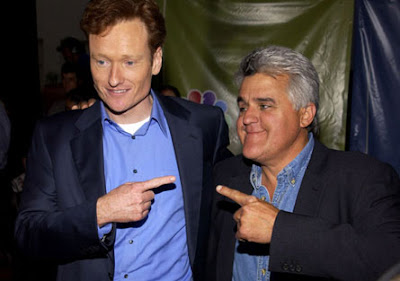 I like Conan (my mom won't watch him because of his hair). He was a main writer in the early seasons of The Simpsons (one of my all-time favorite programs), back when the show was quality all the time, so I'm biased toward the guy and I was happy he'd been picked to host The Tonight Show. I was always disappointed that AFKN (the precursor to AFN Korea) didn't show him at all, and I'd watch as much as possible when I was back in California for two months out of the year. I think Leno's all right, though if I had to choose one or the other I'd choose Letterman. Jimmy Fallon is very funny if people give him a chance, though I think he was more in his element on SNL's Weekend Update. Jimmy Kimmel, whose show I've only seen highlights of, remains pretty funny.

What I'd like to see out of this is Conan get another show somewhere, basically a transplant of his show that just ended, since it has Andy Richter back on board. More "In the Year 2000" stuff, plus those news things where a show regular's mouth is placed on a photo of some newsmaker Conan is "interviewing."

What I'd also like to see is NBC bringing back some quality drama — and sticking with it. I love me my NBC, but since I got to Hawaii, I've seen some good-quality drama fall by the wayside, axed by NBC executives who didn't give the shows a chance to build a following (à la Hill Street Blues): The Black Donnellys, Studio 60, Southland, Life, and even that funky cop drama starring Jeff Goldblum where he imagined conversations with the deceased. At least they've saved Friday Night Lights, 30 Rock, The Office, etc.

Oh, geez, I ended up writing a lot more than I'd planned, and I haven't even gotten to the reason I chose this title. The Wall Street Journal has an op-ed on the whole thing, comparing Leno's machinations at NBC to Hitler's in Europe about three-quarters of a century ago. NBC is Neville Chamberlain, and O'Brien is Czechoslovakia. An excerpt:


Jay Leno, much like Adolf Hitler, is a master of making secret demands for foreign territory and then acting like the wronged party. First he pretended that he wanted to annex only the first half-hour of Mr. O'Brien's "Tonight Show." Here he was mimicking Hitler, who insisted that he merely wanted to annex the German-speaking Sudetenland, not all of Czechoslovakia.

Then, adopting the craven British Prime Minister Neville Chamberlain as a role model, NBC stabbed Mr. O'Brien in the back by agreeing to let Mr. Leno reoccupy the first segment of his old "Tonight Show" slot. NBC's defense was that Mr. O'Brien had dismal ratings, and the show was a bit of a mess. But the same can be said about Czechoslovakia, a hodgepodge cobbled together after the First World War that never really got its act together.

Returning from Munich, Chamberlain joyously waved a piece of paper in the air and proclaimed that the accord with Hitler guaranteed peace in our time. Returning to Burbank, NBC officials expected the same result from its deal with Messrs. Leno and O'Brien.

Here's where the parallels become even more eerie. In acquiescing to Mr. Leno's sotto voce demands to annex one-half of "The Tonight Show," NBC thought it could put the whole ugly controversy to rest. Wrong. Interpreting generosity as weakness, Mr. Leno began to maneuver for complete control of "The Tonight Show." Here he was again taking his cue from der Fuhrer, manipulating his outgunned adversary into a position so humiliating he literally had no choice but to surrender. Just as Edward Beneš, president of Czechoslovakia, was forced to abandon ship once he had been betrayed by his erstwhile allies, Mr. O'Brien was forced to abdicate and cede his entire one-hour program to the man he had replaced. He did get a significantly bigger going-away present than Beneš, however.

Today, NBC—much like Chamberlain—is daft enough to believe that Mr. Leno's demands will now cease. If history is any guide, this is unlikely. After pocketing Czechoslovakia, Hitler immediately took dead aim at Poland. Using the same game plan, Mr. Leno will soon go after Jimmy Fallon, who follows "The Tonight Show," quite possibly demanding that NBC expand "Tonight" to its original 90-minute length.


Make of it what you will.