There's a small number of books I read when I was a teen that stuck out in my mind so much that I still have a visual memory of reading the words on their page and where I was when I was reading them. Among these are Hiroshima (John Hersey), One Hundred Years of Solitude (Gabriel García Márquez), To Kill A Mockingbird (Harper Lee), The Autobiography of Malcolm X (Alex Haley), and Catcher In The Rye (J.D. Salinger).

Maybe not the most impressive list — I should have read far more than I did, but I was busy getting good grades and that didn't necessitate reading great literature — but I was reading for my enjoyment, not to dazzle anyone.

The last author listed there, J.D. Salinger, has died, at his home in Cornish, New Hampshire. He was ninety-one. 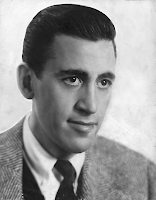 The book impressed me, though not in the life-changing way that made some people hunt down poor Mr Salinger so they could tell him how life-changing it was. If I'd met him, I would have simply said, "I loved your book," and then asked him how New Hampshire was. I remember from the book thinking how screwed up some adults were and how that ended up screwing up some kids and adolescents. (That message resonated a bit with me, because at the time I was in some student leadership positions where I ended up going head-to-head with a handful of teachers and administrators who, well, had lackluster ethics and were in need of recalibrating their moral compass and their life's direction; that's all I have to say about that.)