KIST creates robot that looks like Rosie from The Jetsons 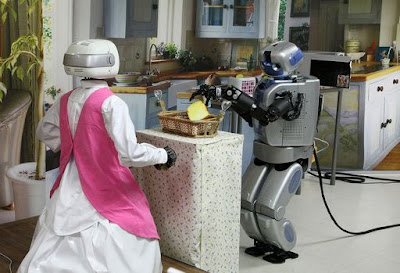 Okay, this is very cool, and although I like the routine of making meals and feel a sense of accomplishment after cleaning up the apartment or doing laundry, I know that others are busier than I and may not feel such a love of housework. Enter KIST and their Mahru-Z:


According to the Korea Times, scientists at the Korea Institute of Science and Technology have created a domestic robot that can help with the laundry and even heat up food in the microwave.

The scientist says that the robot, called "Mahru-Z," is a human-like machine with arms, legs, a rotating head, and it has the capability to "see" objects in three dimensions and recognize chores that need to be done. This is amazing for a machine of just taller than 4 feet and weighing about 120 pounds. I am 6 foot tall and often find myself not knowing what to do standing right in the middle of a messy room.

KIST engineers say that Mahru-Z can use its moving hands, elbows, and six fingers to pick up a dirty shirt, throw it into a washing machine, and push the buttons to get the laundry done. Oh, that may be it--I have only five fingers.

Other than working autonomously, Mahru-Z can also work with its fellow maid robot, Marhu-M, an earlier KIST creation that moves on wheels. Mahru-Z can, for example, put fruit in a basket while Mahru-M, which has the advantage in mobility, can locate the owner and bring him the basket directly.

Both machines can be controlled remotely through a computer server.


It's too bad the creators felt the need to uglify the word maru by adding an extraneous h. 마루, after all, works in both McCune-Reischauer and the godawful "Revised Romanization" spawned by the ignorati at the NAKL.

Anyway, I'll think about buying one of these when it can clean toilets and take out the trash, but I do think that investing in technology that will allow the growing elderly population to live independently will be a boon to the economy, not to mention self-esteem.