Has Google grown a pair?

Well, after helping Beijing channel Google searches toward state-friendly websites, it looks like Google has sprouted a conscience. After finding that an attack originating in China may have been aimed at tracking down human rights activists, Google has suggested they may pull out of China:


Google said Tuesday that it may pull out of China because of a sophisticated computer network attack originating in China and targeting its e-mail service.

The company said it had evidence to suggest that "a primary goal of the attackers was accessing the Gmail accounts" of Chinese human rights activists. The attack was discovered in December.

Based on its investigation to date, Google said it does not believe the cyber attack succeeded. "Only two Gmail accounts appear to have been accessed, and that activity was limited to account information (such as the date the account was created) and subject line, rather than the content of emails themselves," the company said in a blog posting.

But David Drummond, Google senior vice president and chief legal officer, added that the attacks "have led us to conclude that we should review the feasibility of our business operations in China."


And not only that, they said they may review their policy of providing "censored search results":


Google has further decided it is no longer willing to continue censoring its search results in Chinese Google sites, Drummond said, and over the next few weeks it will discuss with the Beijing government how it may operate "an unfiltered search engine within the law, if at all," he said.

"We recognize that this may well mean having to shut down Google.cn, and potentially our offices in China," he said.

Privacy advocates applauded Google's move to disclose the attack and reverse its stand on censorship of its China search engine results.


Good on them, if they actually go through with this (more on how I feel about global corps kowtowing to China found here).

And in honor of Google and their newfound cojones, may I suggest the following artwork for tomorrow's Google home page? 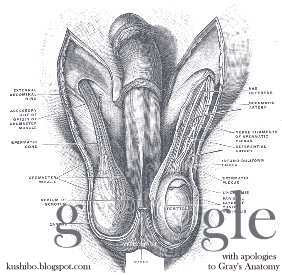