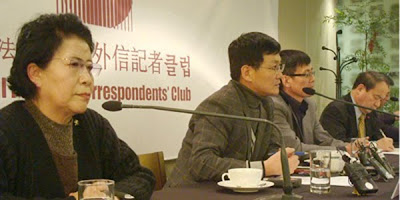 John Glionna of the Los Angeles Times has an article focusing on the tales of former residents of Yodok Prison, who told their stories at the Seoul Foreign Correspondents Club recently. From the LAT:


For years, Kim Young Soon said, she struggled with a cruel uncertainty: She didn't know the crime that landed her in Yodok prison, the notorious penal colony in secretive North Korea.

One day in 1970,North Korean secret police agents came for Kim and her family: her parents, husband, three sons and daughter. They were taken to the gulag whose mere name stirs terror among many North Koreans.

Life under the regime took its toll on Kim's family. Her parents died of hunger at Yodok, she said. One son accidentally drowned there. Another was executed in 1989 while trying to escape from North Korea.

Kim's husband was taken to a separate camp, which she calls "a place with no return." She never saw him again.

On Tuesday, Kim and two other former Yodok prisoners told their stories at a news conference in Seoul held by a coalition of human rights activists looking into the prison situation in North Korea.


These same activists have petitioned the International Criminal Court to put North Korea's Dear Leader on trial for human rights violations, which is one reason their situation attracted the attention of the press. Certainly since the Lee Myungbak administration began, the press seems more willing to focus on such stories, and the Korean public is again getting a steady diet of the suffering of their brethren up north.