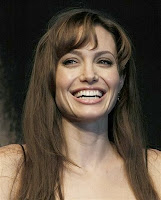 Geez, I've spent like the last hour or so trying to track down the comment I made a few weeks or months ago — most likely here at Monster Island, at One Free Korea, or at ROK Drop — saying that despite such high-profile cases as the catch-and-release of Laura Ling and Euna Lee or Robert Park, what the North Korean refugees and the North Koreans still in the DPRK need is a celebrity to take up their cause, à la Darfur, New Orleans, Tibet, etc. If someone remembers where I put that, please let me know.

I mention this because it seems Ms Jolie may be interested in assuming that mantle. In a swing through Seoul to publicize her latest film, an action thriller entitled Salt, she spoke out on behalf of North Koreans. From the Los Angeles Times:


Angelina Jolie says she's worried about the people of North Korea, particularly the persecution defectors face when repatriated to the reclusive state.

Jolie was in Seoul on Wednesday to promote her latest action thriller, "Salt," which opens with a scene that takes place in a North Korean prison.

Jolie, who serves as a goodwill ambassador for the U.N. High Commissioner for Refugees, said she got a tutorial on the plight of North Korean defectors from Seoul-based officials from the U.N. refugee agency.

"They spoke a lot about the concerns about people being persecuted when they are sent back to North Korea," she said. "I'm very concerned about the people."

Say what you will about Hollywood celebrities taking up pet causes, but Ms Jolie seems to know her stuff, or at least tries to (I'm hoping she's more intelligent than this when it comes to Korean stuff). And it's probably no accident that the movie starts with Ms Jolie's character being beaten and brutalized by DPRK soldiers. (I just saw the film today.)

In fact, in addition to the odd coincidence of sexy deep-cover spy Anna Chapman being arrested and deported just days before Salt was released, I think the opening of the film will remind some of Laura Ling and Euna Lee.

Anyway, the movie itself is a fun ride. I look forward to a sequel with Chiwetel Ejiofor, which can be called Salt & Pepper or Salt II.
on July 31, 2010