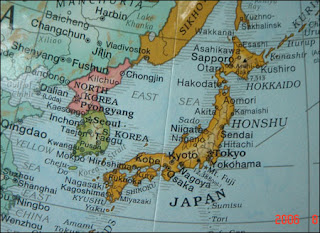 The Korea Times is reporting that Seoul will propose that that body of water between the Korean Peninsula and the Japanese Archipelago be officially called both East Sea and the Sea of Japan.

And although the Korea Herald is reporting that some people in South Korea aren't happy about that — it's the East Sea and the East Sea only! — I think it is a fine solution.

In fact, it fits in perfectly with the International Hydrographic Organization's policies on the matter (see also here):


When two or more countries share a geographical feature, its designation is generally standardized through consultations among the countries concerned. If the effort to standardize it fails, however, the names used by each of the countries are used concurrently. This general rule of international cartography is also confirmed in the International Hydrographic Organization Technical Resolution A4.2.6. adopted in 1974 and the United Nations Resolution in the Standardization of Geographical Names Ⅲ/20 adopted in 1977.

There are many in the K-blogopshere who say that Korea is wrong on this issue (not true, since the IHO supports the Korean position) or that Korea is foolish to make a big deal out of this (debatable, since pushing the name allows it to gain currency and acceptance but sometimes comes across as annoying and petty).