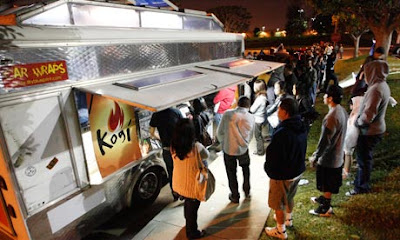 The Los Angeles Times thinks that just might happen:


Josh Hiller is fed up. As a partner in RoadStoves, the food truck outfitter that helped launch Kogi into the stratosphere, he thinks L.A.'s rapidly expanding new-wave food truck scene is getting out of hand.

"We tried to be very specific about the trucks we launched; we were looking for good business models and good food," says Hiller of the months that followed Kogi's launch 21/2 years ago and its unexpected success. At the time, Angelenos, united by Twitter, lined up for two hours or more to taste the truck's signature Korean barbecue tacos.

"We got hundreds of calls, but we rejected 95% of the requests. The problem came when the other commissaries and truck owners saw money and basically just prostituted the whole culture. So what you ended up with was 15 so-so trucks parked on Mid-Wilshire, the city unhappy, a mediocre food product and all the truck owners cannibalizing each other's business."

Actually, a bunch of copycat competitors jumping on the bandwagon — literally — sounds exactly like the mom-and-pop Korean business model. It has worked in Korea for lots of small-time entrepreneurs, so maybe it will work among fans of Korean food as well.


On the other hand, if they really are putting out an inferior product, that might poison the popular trend. On the other other hand, however, this social media-fed craze is the perfect venue for spreading the word that, say, Kogi-on-Wheels* or What The Truck?* just plain suck in terms of taste and/or authenticity, which will lead fans back to the original. I myself, when I'm back in the OC, will go in for the "real" thing.