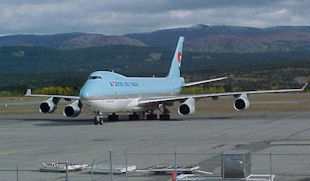 I only vaguely remember reading about this story in the aftermath of 9/11, what with the sadness and anger over so much death and then the march to war in Afghanistan when the Taliban would not give up Osama bin Laden and the rest of al Qaeda who were using their country as a base.

It is the story of how two Korean Airlines jumbo jets were forced to land at Whitehorse International Airport way up in the Yukon when someone flying the plane or directing air traffic sent messages indicating they had been hijacked:


One of the double-decker planes first raised an alarm at 9:06 a.m. PT, three hours and 21 minutes after American Airlines Flight 11 plowed into the north tower of the World Trade Center.

That was when the United States Federal Aviation Administration was informed that a text message containing the international code for hijacking — HJK — had passed between the cockpit of Flight 085 and Korean Air's ground control at 8:09 a.m. Although it was, and still is, unclear which end was sending the message, it was remarkable as it was the only such text message sent that day.

It was also remarkable for those monitoring the plane at the time because when ground control spoke to the plane's pilot, he reported all was well.

Meanwhile in the U.S., then-vice-president Dick Cheney had authorized his country's war planes to "intercept civilian tracks of interest and shoot them down if they seem to be threatening a U.S. city. Clearance to shoot is authorized to save lives on the ground."

In other words: If the Air Force brass believed a plane full of people was going crash into another American building, they were to blow it out of the sky.

The 230 souls on board Flight 085 had no idea they were being tracked by two fighter jets with shoot-to-kill authorization, and only the crew knew what had happened in New York City to justify such an order.

The residents of Whitehorse (the capital of the territory but with only twenty thousand folks) were evacuated and this apparently left a very indelible mark on the collective memory. Enough that someone made a documentary out if it, Never Happen Here — the Whitehorse 9/11 Story.

Here's the trailer for the documentary:

I'm interested in this in part due to the obvious Korea connection. Imagine if American or Canadian military had shot down a plane full of civilians and it turned out there was no hijacking emergency whatsoever. That could have led to ill will of such colossal proportions it might have tipped the political balance in Northeast Asia.

Email ThisBlogThis!Share to TwitterShare to FacebookShare to Pinterest
Labels: 9/11, KAL