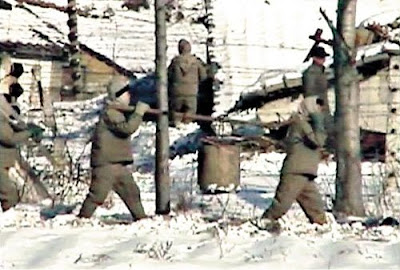 ORIGINAL POST (7:00 p.m., May 4):
Amnesty International has put together a report that takes advantage of satellite imagery of isolated prison camps and interviews from refugees who have escaped North Korea. It paints a picture of unspeakable cruelty, deprivation, slave-like conditions, and constant death.

AI also describes how these camps have grown significantly over the past decade. They now warehouse some 200,000 prisoners, including political opponents, others opposed to the state, and in many cases their family members.

Reuters is also carrying the story.

UPDATE (7:30 p.m., May 5):
Amnesty International has put the following video up at YouTube, explaining in some detail how they put together the report.

Meanwhile, over at ROK Drop, GI Korea welcomes the report but warns us of the AI's "fraudulent concern for North Korean human rights." He is right that AI seems to be late to the table on this one, but I'm not going to fault this Western organization for going after perceived human rights abuses in Western countries like South Korea or the United States, two places where they stand a chance to effect change far more readily than in North Korea.

It's not like, say, the work of Bruce Cumings, who rails against South Korea and the US while pretending that things in North Korea are actually admirably okay. At least AI occasionally acknowledges the terrible things going on up north.