And that's the story of half the people I know. [rimshot]

Um, anyway, here's the political ad at the center of one of the first pander bear sightings of the new political season:

The ad is funny for its SNL-parody-style quality to it. But the more you watch it, the more, well, unfunny it becomes. It's pandering to minorities ("My wife is Korean!") instead of addressing issues that may face them. The guy's would-be district is 15% Asian... okay, so what does that mean exactly? 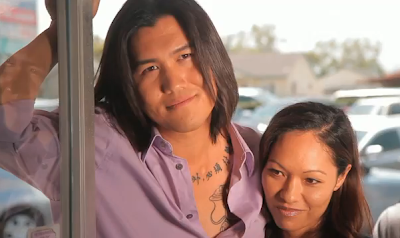 Anyway, what's even more sorta-borderline-offensive about it is that they seem to have taken their casting/ambience clues from CSI:Koreantown, what with the guy whose street cred isn't enough just looking Asian and having an Asian woman hanging onto him... instead he has to show how Asian he truly is by having his Kanji tats visible with his unbuttoned shirt. Because Chinese character tattoos are de rigueur for Hollywood-style representations. (I certainly hope his Robert Park-style long hair doesn't become a thing. That 'do is a don't.)

And of course the woman runs a dry cleaners. God forbid a Korean immigrant might be depicted as a retiree or a church secretary or something normal that lots of "I'm a Korean"s do.

This is being discussed over at The Marmot's Hole and ROK Drop, where some have questioned whether the "I'm a Korean" ajumma is really Korean, being as how her hair was not permed into a spherical brillo pad monstrosity.

Perhaps they've been thrown off by the kyopo pensioner not being acted by June Kyoko Lu... 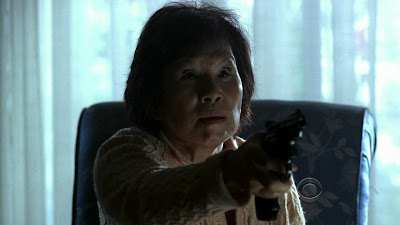 ... who portrays 82.6% of all depictions of Korean ajumma or halmŏni on television and film. It's in her contract.

A few also suggested that had Republicans run this ad, the Dems would be all over it. Well, the left (as represented by the Huffington Post) thought it was pretty wrong and "borderline racist." Someone from thinkprogress.org was "stunned into speechlessness."

At any rate, this mensch probably did exactly what he set out to do: Dan Adler got people talking about his campaign where he was running #3. We'll have to wait for the primary on May 17 to see if there really is no such thing as bad publicity.

Anyway, a HT to Wangkon. He alerted me to this well before it became a national meme, at which time I would have blogged it and given him credit, but Blogger was clogger at the time.