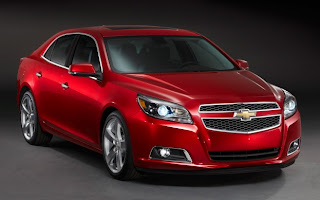 General Motors, which recently rebadged its South Korean operation by dropping the Daewoo name for the more global Chevrolet moniker, announced that its plant at Pup'yŏng (Bupyeong) will be the first in the world to make the all-new 2013 Chevy Malibu.

The goal is to expand GM's general footprint — and Chevrolet's specific presence — by pushing some of its more popular global offerings, and they think they have a winner with the Malibu:


Adding the Malibu may further bolster GM’s momentum in the Korean market. The automaker reported today that its Korean unit sold 71,608 vehicles in April, marking an 8.5-percent increase year-to-year, and a 5.9-percent increase over March. It’s unknown exactly how well the Malibu will pan out in the market, but GM points to strong digital interest — Korean fan clubs for the new model reportedly have over 30,000 members — as a predictor of things to come.

It is indeed a smart-looking car. GM also sells several Buick models, which it's marketing as upscale luxury vehicles, so we may see General Motors give Kia and Hyundai a run for their money.