North Korea has abducted 180,000 people over the past several decades? 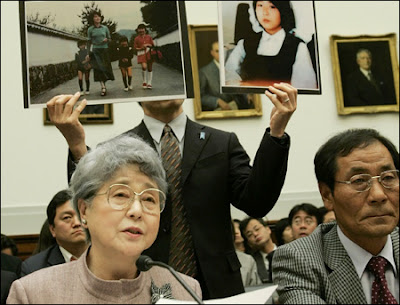 We all know about the abductions of dozens of Japanese and hundreds if not thousands of South Koreans, but a report by a US-based rights group says the real numbers go much further, with far more countries affected.


The Committee for Human Rights in North Korea says more than 180,000 people from 14 countries have been taken. The vast majority of these cases are not typical abductions.

They involve prisoners not returned after the 1950-53 Korean War and Japanese who settled in North Korea but were never allowed home.

Other reports highlight North Korea's foreign operations - including a Japanese college student and his girlfriend snatched from a beach in Japan by North Korean agents.

The figure includes more than 3,000 South Korean fishermen forcibly towed into North Korean waters and students in European cities - including London, it says - lured to the secretive state with the promise of jobs and then denied permission to leave.

In one such case at a London language school in 1983, a North Korean agent, Megumi Yao, was operating undercover, targeting Japanese students for abduction.

She promised them good jobs in North Korea, and introduced one of the students to her contacts in Denmark. A few weeks later, the student boarded a flight to Pyongyang and disappeared.

Not to make light of such situations, if true, but it would be hella hard to pull a midnight run in North Korea.

Who in their right mind would go to North Korea, you ask? Lots, potentially. I mean, nowadays English teaching in global backwaters is Xtreme Working for the college set, and I can imagine more than a few wanderlusters tired of the daily grind back in Seattle, Saskatoon, or Sheffield heading for Sariwon, only to find that the DPRK is one big Hotel California.

Among people I know personally, I've heard some of the adventure seekers — including my ex — say they'd consider teaching English in the Great Fright North, but this report, if true, would certainly make me think twice. (I myself had thought it would be interesting to temporarily teach public health at Pyongyang University of Science and Technology once I'm done with my grad studies.)

Then again, is a lack of regular Internet access being chalked up to an "abduction"?

Perhaps the most dire claim (and most believable, as in you'd better believe it) is this:


Some abductions, they say, are apparently a bid to train its intelligence agents, but the report also cites more recent claims that North Korean agents are targeting those in China's border areas who are suspected of helping their people escape the closed state.

Indeed, this is one more reason my hat is off to those people — often driven by religious conviction — who risk their safety, their freedom, and sometimes their lives to ferry people out of North Korea.

If some messianic would-be Moses like Robert Park or Aijalon Mahli Gomes really wants to do something worthwhile instead of setting oneself up as a bargaining chip, go and do that.

But cut your hair first (@Robert Park, because seriously you look like a Myŏngdong street preacher circa 1986).

Or grow some (@Aijalon Mahli Gomes).