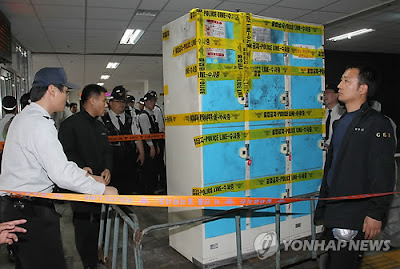 This is quite disturbing news. Apparently a "bomb" of sorts went off in a locker at Seoul Station, followed by a similar attack at the Kangnam Express Bus Terminal half an hour later.


A string of explosions involving what appeared to be butane gas occurred at Seoul's two major transportation hubs Thursday, prompting police to launch a terrorism probe.

No one was hurt or killed in the explosions at Seoul Station in the central part of the capital and Seoul Express Bus Terminal in southern part of the city, police said.

The explosives appeared to be homemade and had been placed inside lockers set up at the train and bus stations for public use, the police said. The explosions occurred about half an hour apart.

The police have evacuated the areas and are tracing a man who they said was seen on a surveillance camera putting a package inside the locker at Seoul Station. Only the explosives at the express bus terminal went off with a boom, they said.

The last part has me a tad confused: the Seoul Station device "exploded" but didn't "go off with a boom"? The Chosun Ilbo described the device as having wires and said no one has taken responsibility for the attack.

This has me a little rattled. As you all know, my home is about half a click from Seoul Station, and I go there quite frequently. With so many people milling around, it would seem an easy target, but people can be pretty diligent about detecting things that don't belong there; it's no wonder the attacker chose to place these things in a locker, but that necessarily mitigates the effects of a smaller explosive device like this.

Obviously the big question is who did this. There's the possibility that this is a forward planning-related attack by a North Korean group or their fifth column operatives. Think that sounds crazy? Well, a few years ago, it would've seemed a bit out of left field (ha ha!) but after the North Koreans attacked Yŏnpyŏng-do Island and killed civilians, all bets are off in terms of non-military targets and casualties. Remember, this is a regime that may be in its death throes, so who knows what they're capable of doing.

Of course, it's just as likely that this was some home-grown, garden-variety, attention-seeking sociopath. South Korea has seen the Taegu subway arsonist (massive death toll!) and the Namdaemun arsonist, so why not this? Of course, this doesn't quite fit that pattern, though. It is a bit too complex to be a sociopath's onanistic act in that there were two attacks in two separate locations: setting up the second means you can't stick around to experience the first. No, indeed this seems a bit more like it was done for political aims rather than maniacal sociopathic purposes.

So close to the killing of Osama bin Laden, one also wonders if this was a hastily prepared attack meant as retaliation. Yes, as a close ally of the United States, and one that sends so many Christian missionaries abroad (many of them the charity worker type, not just Bible-thumping proselytizers), the ROK is on al Qaeda's radar. In fact, it was one week ago that the Chosun Ilbo carried warnings that South Koreans need to be wary of heightened terror threats.

It's entirely possible that there is a nascent al Qaeda cell here, perhaps acting independently, and they threw together what they could for a last-minute attack. It's also plausible that this may additionally be a test run for something else, a way of gauging Seoul Station's Kangnam Express Bus Terminal's security measures and their response.

Whoever it is, I hope the authorities take this very seriously. Violent and murderous sociopaths need to be locked up — the Namdaemun arsonist had been released after other devious attempts — or else they will keep trying stuff. If it's something from the North, it's time to take seriously the violent faction within the chinboistas and the fifth column who do occasionally resort to murder and mayhem (though it's been a while since we've had an assassination).

And for goodness sake, if it turns out to be foreign bombers, don't respond with a cultural campaign — "Train station bombings are commonplace in many other countries, but they are considered socially unacceptable in Korea. Please refrain from this type of activity during your stay and you'll have a much more enjoyable time with the locals." Indeed, suggesting they try soju and samgyŏpsal might just set them off.

And for goodness sake, whatever you do, don't use this as an excuse for more background checks for English teachers. They've gone through enough as it is.