K.C. Choi donating $200K of his winnings to US tornado victims

One golf writer is holding out South Korea's K.C. Choi and Japan's Ryo Ishikawa as examples of "class act" athletes who area a stark contrast with their greedy counterparts others sports, notably the NFL. 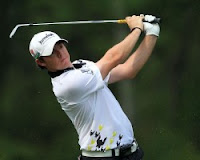 While Mr Choi, who now resides in Texas, is donating a huge chunk of change to Americans in the South, where hundreds have been killed by freak tornadoes, Mr Ishikawa is donating his entire year's earnings to victims of the Tohoku earthquake and tsunami.

While I think Messieurs Choi and Ishikawa deserve our admiration, I don't know how fair it is to bash NFL players. After all, their sport is far more grueling, which means (to me at least) that they have a much greater chance of career-ending injury, debilitation, and even death (concussions are a huge issue).
on May 19, 2011